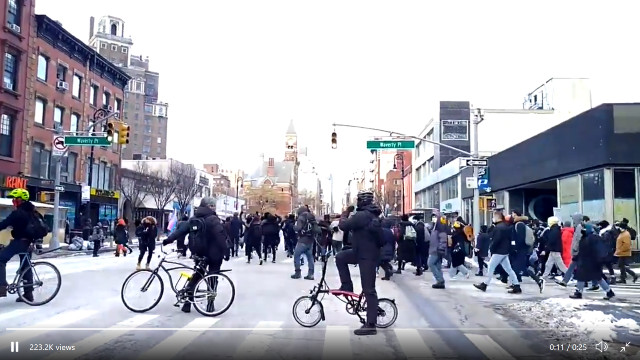 Liberals aren’t exactly the sharpest tools in the shed. Especially the really radical ones who believe in things like Critical Race Theory, which teaches that institutions here in America are inherently racist against minorities. It’s a convoluted mess that was inspired by the teaching of Marx. That should tell you a great deal about why it’s junk.

A good case in point is a story coming out of San Francisco. Activists from New York City joined with citizens of California’s Bay Area in a march against “white supremacy” after a black man was arrested after launching a rather vicious high-profile attack on an elderly Thai immigrant, Vicha Ratanapakdee. The man died as a result of the attack.

The attack, which was captured in shocking detail by a nearby surveillance camera, was the latest in a string of violent attacks against Asian-Americans and Asian immigrants in and around San Francisco, California, and prompted a national call to address racism against the Asian community. According to local media, there have been “20+” attacks in the city’s Chinatown neighborhood alone in the past several weeks. At least one similar attack happened in New York City.

In order to bring national attention to the issue, activists in New York City organized a march on Saturday, in support of ending “white supremacy.”

“Several hundred people from the Washington Square Park ‘Unite Against White Nationalism’ rally are now marching through Chelsea. This protest is in response to anti-Asian/AAPI violence happening in New York and across the country,” an activist account associated with the movement tweeted on Saturday.

This protest is in response to anti-Asian/AAPI violence happening in New York and across the country. pic.twitter.com/Qy3kG3tRiK

Around the same time one of these rallies was being held in the city of Oakland, Speaker Nancy Pelosi, who is the representative for the Bay Area, along with Rep. Judy Chu, denounced “white supremacy” that led to these attacks, and, true to form, called out former President Donald Trump for stoking the flames because he used the phrase “China virus” to refer to the coronavirus.

Yes, that’s right. Orange Man Bad. They are never going to let this go. The left will blame Trump for stuff that happens 20 years from now.

“We warned that spreading xenophobia would put lives at risk. But our pleas and the guidance from experts were ignored,” Chu stated. “Donald Trump and Republicans doubled down on using slurs like ‘Wuhan virus,’ ‘China plague’ and ‘Kung flu.’ And that tactic succeeded in promoting the stigma that directed people’s anger at Asian Americans. What started as dirty looks and verbal assaults has escalated to physical attacks and violence against innocent Asian Americans.”

“Antoine Watson, a 19-year-old resident of Daly City, made his first court appearance at the Hall of Justice after being taken into custody Saturday in what police have described as an ‘unprovoked’ attack on Vicha Ratanapakdee,” the San Francisco Examiner said in a report published last week. “Authorities say Watson rushed across a street and pushed Ratanapakdee to the ground near Anzavista and Fortuna avenues last Thursday at around 8:28 a.m, causing him to hit his head on the pavement and slide into a garage door. Ratanapakdee died Saturday as a result of his injuries after being taken to a hospital.”

The police have noted that “there is no evidence the attack was a hate crime.”

So why are leftists protesting white supremacy in connection with the deadly assault if race had nothing to do with it? Probably because these folks just want any excuse possible to take to the streets and pretend they are fighting the same good fight as the Civil Rights movement in the 1960s.

They are desperate for meaning in their lives, an entire lost generation creating problems just so they can show up and solve them while taking credit for being heroes.