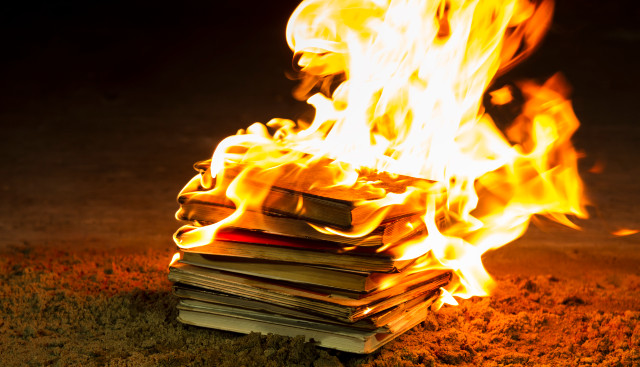 A Black Lives Matter activist employed as a library staffer in Chattanooga, Tennessee, allegedly posted up a video on his Instagram account which featured him burning library books he’d brought home that were authored by conservatives like former President Donald Trump and Ann Coulter.

This course of action, being a destruction of others’ property, ended up getting Cameron “C-Grimey” Williams, 25, booted from the library’s staff. And, like a good BLM soldier, as soon as it happened he started screaming racism.

Cameron “C-Grimey” Williams, 35, “started as a part-time library specialist at the downtown branch more than two years ago, helping to manage a computer room and maker space and conducting outreach campaigns encouraging residents to take advantage of the resources,” The Washington Post reported. A rapper, according to the Post, he “helped organize demonstrations against police brutality last year.” The Post added, “he and other activists were arrested for allegedly blocking an emergency vehicle, among other charges.”

Those other charges included taking a Sheriff’s flag and burning it, as the Chattanoogan reported:

Marie Mott and Cameron Williams were charged by Chattanooga Police with obstructing an intersection and blocking an emergency vehicle. Later in the day, they were charged by the Hamilton County Sheriff’s Office in connection with taking the Sheriff’s flag from the county jail and burning it at Miller Park. Chattanooga Police on Sunday morning said they had obtained warrants for multiple protesters, including Ms. Mott and Williams, “who engaged in illegal and dangerous activity” on Friday at or near the intersection of Market and East Main Streets. Police said the protesters blocked an emergency vehicle attempting to get to an active call for a vehicle crash with injuries.

In the video, Williams burned a copy of Coulter’s “How To Talk To A Liberal (If You Must)” and the former president’s “Crippled America” in an outdoor fire. He saturated both books in lighter fluid and lit them up while blasting, ‘FDT’ which is a protest song by YG and Nipsey Hussle.

“his boss asked him to weed through the political science section, specifically citing his activist background and instructing him to take down titles that contained misinformation or where views, attitudes, or information had changed. Books more than 10 years old could also come off the shelves.”

Another report spoke with a library spokesperson who stated that the library had trained Williams in the “rigorous and thorough stand practice” for dealing with books, stating the process for book removal is dependent on certain factors like publication date, circulation date, and physical condition.

Obviously, Williams did not follow the rules that he was taught, allowing his activism to take over his job duties.

“It’s our job to ensure that all walks of life have access to information without judgment or prejudice,” said the library spokesperson. “Whether these materials were actually destroyed in a fire or even if they were just removed, that does go against our policy. Because at the end of the day, we believe that censorship has no place in a library.”

Williams said to the Post, “Time after time, we’ve used old books for art projects. Time after time, employees have been encouraged to take books. This is a BS rule that doesn’t exist. They’re just using it to persecute me. … This is not the precedent on how this stuff is handled. To be frank, it’s because I’m a community member that’s been speaking for the betterment of Black people for several years.”

The BLM activist concluded, “I was treated as a token Black man, but as soon as I speak forcefully for Black people, they essentially tried to assassinate my character.”

Or maybe you were booted because you didn’t follow proper procedure and burned books that were not your personal property? Seems reasonable to me.