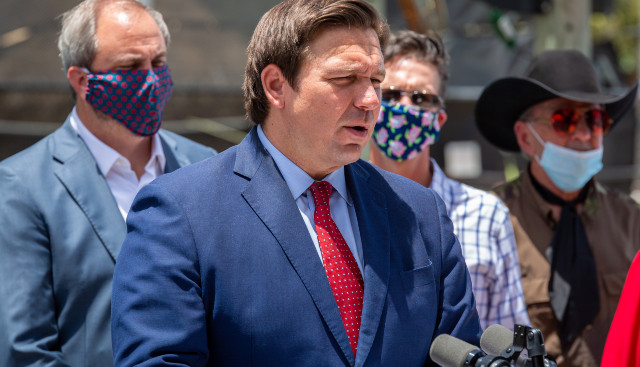 Florida Republican Gov. Ron DeSantis has responded to President Joe Biden’s request for some of the state’s National Guard members to be sent to Washington, D.C., ahead of his State of the Union address planned for Tuesday.

DeSantis took to Twitter where he rejected the request, revealing that the president had asked governors from every state to deploy some of its National Guard troops to the event.

“Last week, the Biden Administration requested the assistance of State National Guards to deploy to Washington D.C. I have rejected this request — there will be no @FLGuard sent to D.C. for Biden’s State of the Union,” DeSantis said in his tweet.

Last week, the Biden Administration requested the assistance of State National Guards to deploy to Washington D.C. I have rejected this request — there will be no @FLGuard sent to D.C. for Biden’s State of the Union.

A report from NBC Washington stated that around 700 National Guard troops have now been activated ahead of the speech as a possible trucker convoy might arrive in the nation’s capital.

“The other 300 Guard personnel are from outside D.C. and have also been approved upon requests from U.S. Capitol Police. Such personnel include approximately 100 Vermont Army National Guard Soldiers, 100 New Jersey National Guard troops and about 80 West Virginia National Guard members who will support security operations within Washington starting later this week,” the outlet stated in its report.

“The request was activated as of 1 p.m. and is approved to continue throughout 11:59 p.m. on Monday, March 7. Neither approval allows troops’ use of helicopters or other aircraft by the National Guard or the sharing of equipment with law enforcement agencies. They will also not carry firearms or take part in law enforcement or domestic-surveillance activities,” the outlet continued.

It was announced on Monday that mask-wearing is now optional for the State of the Union set for Tuesday night.

“The Washington DC region is now in the ‘green level’ or low level in this new CDC schema allowing for reduction in coronavirus prevention measures such as coronavirus testing frequency and indoor mask wear,” U.S. Capitol physician Brian P. Monahan went on to say.

“COVID19 layered protection measures such as vaccination emphasis, and daily home health screening inventory prior to coming to work should continue,” he then stated.

News: Capitol physician says in an update to staff that masks are now optional at the Capitol, which extends to Biden's State of the Union address on Tuesday @axios https://t.co/rdWBEvhgGP

“This comes on the heels of a new survey finding that half of those surveyed by Rasmussen think Biden should be impeached from office,” Conservative Brief reported. “And what’s more, almost as many surveyed think that’s what Republicans will do if the party wins back control of the House in the 2022 midterms.”

What’s more, if Biden were to actually be impeached, that would likely mean his trial would take place in a Republican controlled Senate, as the midterms are this November. That would certainly spell disaster for him and his administration, though it would be a God-send for us as a nation, though Harris would not be a much better leader.