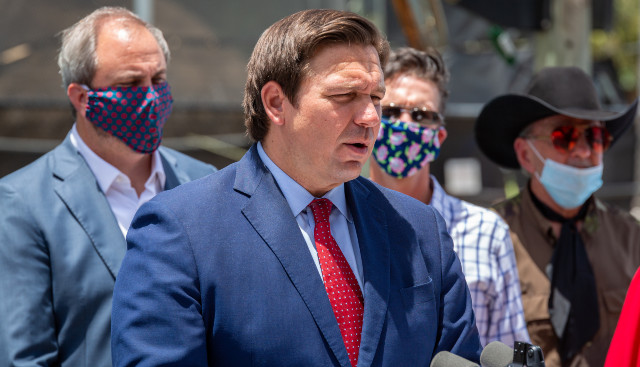 Florida Gov. Ron DeSantis has warned President Joe Biden that his administration needs to be prepared to act in response to the attack on the Colonial Pipeline.

“But the Biden administration needs to take this seriously,” DeSantis stated during an interview he had with Fox News host Sean Hannity.“Their initial response is, ‘Oh, this is a private pipeline,’ and just shrug your shoulders. This is important infrastructure for our country, and it could impact our economy greatly if they don’t respond.”

“This is something that’s a very serious attack on critical infrastructure in our country,” DeSantis continued. “This pipeline actually doesn’t touch Florida, but it does feed into many of our gas stations. So we declared a state of emergency, we’re lifting restrictions to be able to get more fuel into pumps.”

Drivers along the East Coast have been scrambling to get gas after a ransomware attack shut down the Colonial Pipeline.

Biden responded by urging people not to hoard gasoline, but that warning has seemingly been ignored by many drivers.

Other topics discussed during the interview were the governor’s pandemic response and Florida’s new election security measures, with DeSantis saying he’s proud of how Florida handled both issues.

“We’re very proud of what we did in Florida in 2020,” the governor said. “You and I’ve talked about it. We counted 11 million votes, by midnight, very transparent. And people had confidence in the results. At the same time, I don’t believe in standing pat. We go on offense, we look forward to heading off problems.”

Biden will likely screw the pooch on this just like he has COVID, the border crisis, and practically everything else he’s touched since taking office almost five months ago.

Folks, if the first few months of his administration is any indication of what we can expect for the next four years, we better become a praying people real fast.