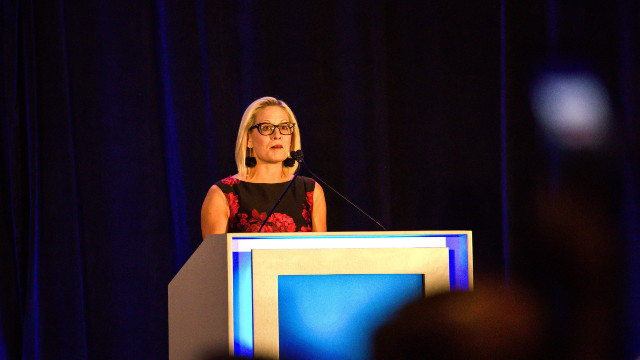 Doing a marathon is pretty difficult, but it looks like it’s going to be twice as difficult for Democrat Sen. Kyrsten Sinema due in large part to the fact that a group of radical left-wing activists will be following her and hounding her during the Boston Marathon on Monday.

It’s not clear as of this writing whether or not the Arizona senator will actually be competing or just watching the race, but either way, this is going to make her outing rather unpleasant.

Sinema herself is well known for being a very dedicated, passionate athlete. Earlier this year she qualified for the Boston Marathon, but ended up breaking her foot during a different marathon. A spokesperson who works for her office has not yet, as of this writing, responded to requests or comments about how she will be participating in the event.

Sinema has faced growing pressure from activists and was recently confronted in a Washington, D.C.-area airport and a bathroom at Arizona State University, where she is a lecturer, with immigration activists filming Sinema and her students.

Congressional Democrats have yet to reach an agreement on the size and scope of the bill, leaving them without the votes to pass the legislation, at least for now, due to their slim majorities in the House and Senate. In addition to Sinema, West Virginia Sen. Joe Manchin has also said he will not back a bill exceeding $1.5 trillion. That’s on top of a $1.2 trillion infrastructure bill that passed the Senate with bipartisan support, which Biden says must be linked to the larger spending proposal.

The radical left in the U.S. is getting more and more bold, and less and less concerned with how rude, boisterous, or even violent they become during their protests, only caring about pushing folks into doing what they want them to do.

And now they’re starting to employ that tactic to people who are actually members of their own party. It’s getting scary out there, folks.