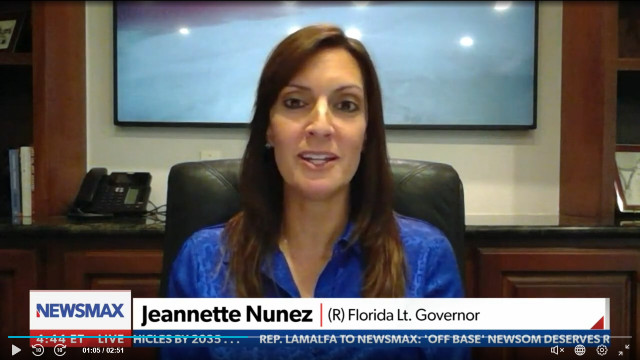 Florida Lt. Gov. Jeanette Nunez spoke with Newsmax where she stated that Gov. Ron DeSantis and the rest of her state “got it right” concerning the proper way to handle the COVID-19 pandemic by opting to avoid the use of vaccine and mask mandates.

“We (in Florida) are in favor of vaccine for those that want it, and we are absolutely against mandates (like) the kind of overreach the federal government is trying to impose on our businesses, on our hardworking Floridians that have really stepped up to the plate during the course of this pandemic, and so we’re not going to stand for that,” Nunez went on to say during an interview on “Eric Bolling: The Balance” Monday. “(Residents approve) as evidenced by the throngs of people that are leaving lockdown states, like California, New York, and Illinois, and they’re coming to Florida for that very reason, because of the great work our governor has done protecting their liberties, because of the great work that the governor has done making sure our businesses could be open so our kids could be in school. All those things just prove that Florida has got it right.”

During a recent speech, DeSantis, a Republican, threatened any government agency that requires vaccinations with a $5,000 fine per violation.

“If a government agency in the state of Florida, forces of vaccine as a condition to employment, that violates Florida law, and you will face a $5,000 fine for every single violation,” DeSantis stated.

Nunez said her boss has made vaccines accessible to residents of the state since they came out, but that he is mindful of the rights the federal government is trying to take away from citizens.

“We are working hard to protect Floridians,” she proclaimed. “Making sure that they have access (to vaccines) like we’ve done from day one. But we also understand that our liberties are precious, and we cannot, we simply cannot, give them over to the federal government and the likes of (President) Joe Biden and (Vice President) Kamala Harris.”

While not mentioning names, Biden called out elected leaders like DeSantis that have opposed his mandates for people to get vaccinated, and other restrictions during the surge of the delta variant of COVID-19.

“This is a pandemic of the unvaccinated, and it’s caused by the fact that despite America having an unprecedented and successful vaccination program, despite the fact that for almost five months free vaccines have been available in 80,000 different locations, we still have nearly 80 million Americans who have failed to get the shot,” the president stated back on Sept. 9. “To make matters worse, there are elected officials actively working to undermine the fight against COVID-19. Instead of encouraging people to get vaccinated and mask up, they’re ordering mobile morgues for the unvaccinated dying from COVID in their communities. This is totally unacceptable.”

Florida is definitely the shining example of how to handle this pandemic, not former Gov. Andrew Cuomo, the same man who has allegedly sexually harassed numerous women and then made a bunch of poor decisions that ended up killing thousands upon thousands of people in nursing homes during the pandemic.

And yet, Cuomo was given a book deal about his leadership during the crisis. Makes no sense, right?