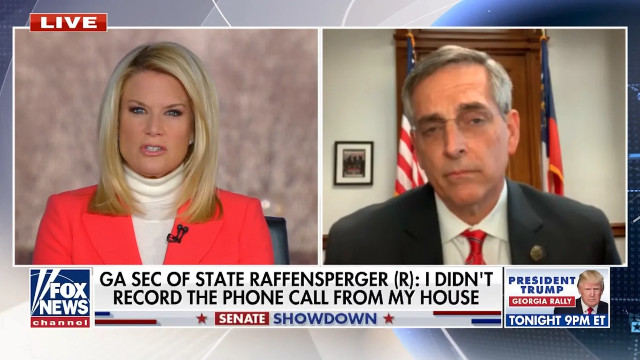 Fox News host Martha MacCallum pressed Georgia Secretary of State Brad Raffensperger flat to the grill like a hamburger patty Monday evening concerning the phone call he had with President Donald Trump that was later leaked to the Washington Post.

Conveniently for the Democratic candidates who are currently in a Senate runoff race that will determine who controls the Senate, the call was leaked just 48 hours before the polls opened.

Here’s some of the transcript from the interview via Daily Wire:

MACCALLUM: So, why did you decide to take the phone call this time? What was different this time?

RAFFENSPERGER: I didn’t know it was being recorded.

I just was at my home with my wife. And I had it on speakerphone. But I didn’t record anything at my house. But I was making notes. But, also, then on Sunday morning, he put out a Twitter. I thought we had a private conversation, just not — left unsaid that it was private, but I just thought it was man to man, just having a conversation, and so — with the president of the United States. But then he goes out on Twitter the next morning and says stuff that’s not true. First of all, he releases that we did have a conversation. So, I didn’t see what the issue was. Then, obviously, we did have a conversation. The whole world knows.

He’s got 80 million Twitter followers. But then he also says stuff that wasn’t true and that…

MACCALLUM: All right, so, understood. So…

RAFFENSPERGER: … I was respectful in that.

RAFFENSPERGER: I think it was after Sunday, when the Twitter came out. I didn’t see it, or — anyway, I became aware of it. And, anyway, so that’s — recording is out there. And now people can look at what was the entirety of the comments that were said. And then they can see what he said versus what I said. And we…

“The information is out there. And it is what it is,” he replied.

“I think that we had to respond to the president’s Twitter. And we responded with the facts that were in the call. And that’s how it got out there,” Raffensperger said.

Raffensperger went on to say that Sen. Perdue owes his wife an apology due to all of the death threats she received after Perdue asked for the secretary of state to resign from his post. He said that he’s “not heard one peep from that man since,” and that “if he wants to call me face to face, man to man, I will talk to him off the record,” but noted that he hasn’t done that.

MacCallum replies to this salty little statement by saying, “So, do you think — it feels like this is very much about a grudge and…”

“It’s not a grudge at all,” Raffensperger fires back.

His responses never really addressed the point. It seems Raffensperger definitely has it out for President Trump and Sen. Perdue, but he’s not going to openly admit that. MacCallum exposed his true heart on national television. No doubt he regrets doing that interview.