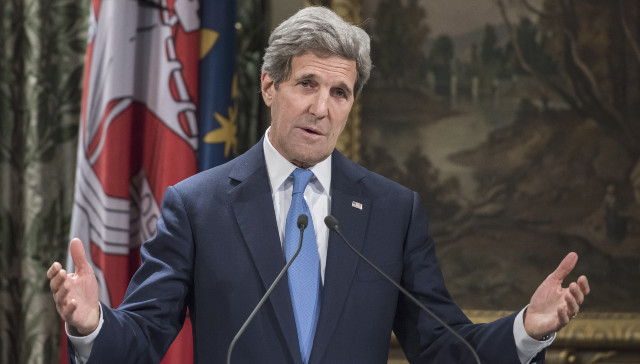 John Kerry is now facing calls from Republicans to step down from his current position as the U.S. Special Envoy for climate change after tapes reveal that he allegedly discussed Israeli military operations with Iran’s foreign minister.

Much of the criticism that Kerry is now facing stems from a New York Times piece that discussed these newly leaked audio recordings that were created back in March in which Iranian Foreign Minister Mohammad Javad Zarif stated that Kerry informed him the nation of Israel attacked Iran’s interests in Syria 200 times.

It’s not clear if this conversation happened while Kerry was secretary of state under Obama or if it happened at some point during Trump’s presidency.

Trump Secretary of State Mike Pompeo led the calls for Kerry to be investigated, saying the tape proved “what I’ve said for years: that [Zarif] continued to engage with former Secretary of State Kerry on policy matters after Kerry’s public service and, according to Zarif, Kerry informed the Iranians of Israeli operations.”

Pompeo added: “Before we cut a deal with Iran that reduces Americans’ security, it would be good to know what the arrangement, if any, may have been between these two leaders.”

Nikki Haley, Trump’s ambassador to the United Nations, called the allegations “disgusting on many levels.”

“Biden and Kerry have to answer for why Kerry would be tipping off Iran, the number one sponsor of terror, while stabbing one of our greatest partners, Israel, in the back,” Haley posted on Twitter.

Sen. Dan Sullivan of Alaska took an opportunity on the Senate floor on Monday to make a call for Kerry’s resignation.

“People are talking about treason — and I don’t throw that word around a lot,” Sullivan went on to say. “John Kerry does all kinds of things that I can’t stand. But this is the one that broke the camel’s back.”

Sen. Ted Cruz said, “If this tape is verified, it would signal catastrophic and disqualifying recklessness by Envoy Kerry to Foreign Minister Zarif that endangered the safety of Americans and our allies.”

“And it would be consistent with his long pattern of empowering Iran’s regime,” Cruz added. “Kerry poured hundreds of billions of dollars into the Ayatollah’s terrorist bank accounts, was a close confidant with Zarif during the Obama administration, and was caught repeatedly meeting with him during the Trump administration (notwithstanding the Logan Act) — and has never publicly accounted for what they discussed.”

This is an extremely serious offense. Like Cruz said, if these recordings can be verified, it’s terrifying to think Kerry was actually giving away secrets like this. The damage that could have been done due to this is hard to measure.

Hopefully, if proven true, Kerry will face harsh consequences for his actions.