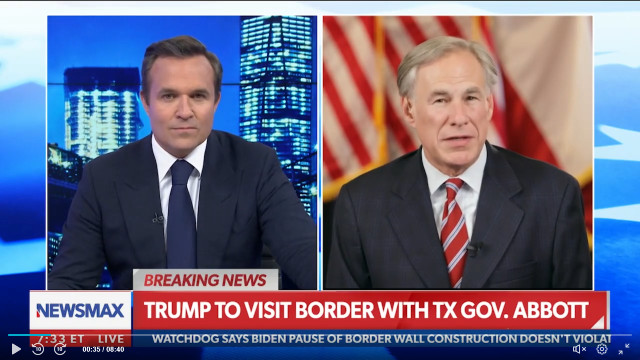 Republican Texas Gov. Greg Abbott recently lamented the lack of concern for border security that is coming from the Biden administration as the border crisis continues to rage on, revealing that he has invited former President Donald Trump to come to his state, going on to say he is going to announce plans for Texas to continue construction on the border wall.

“We need to build the border wall in certain strategic areas, and it’s going to be tomorrow that I make the public announcement about exactly what the Texas plan is for building the border wall,” Abbott said during a recent conversation he had with Newsmax‘s “Greg Kelly Reports.”

“Texas has a plan to step up and continue to build the wall because we need to help our fellow Texans from the unbelievable number of people coming across the border,” he continued.

The appearance of Abbott on the show came just a few hours after the former president announced on his America PAC website that he would be accepting the invitation from the Texas governor to come visit the border.

“He set the high mark for what needs to be done on the border with building the border wall, the remain in Mexico policy, with the Title 42 policy, by sending a message that no longer could people come across the border illegally,” Abbott said to program host Greg Kelly.

“He was going to enforce the immigration laws,” the governor said, adding,

“It’s amazing that we now have been through about five months or so of another administration that have yet to come down to the border, either the president or vice president.”

For the entire time that Joe Biden has been serving as the president, he has pretty much been doing everything in his power to avoid the mess at the border. He appointed Vice President Kamala Harris to handle the situation, essentially passing the buck, but she has basically done nothing to solve the problem either.

Neither of the two have visited the border.

“President Trump was highly engaged and he remained in active communication with me during the entirety of his presidency,” Abbott went on to say.

“Obviously President Trump was controlling the border far better than President Biden is,” he continued.

And that’s the truth.