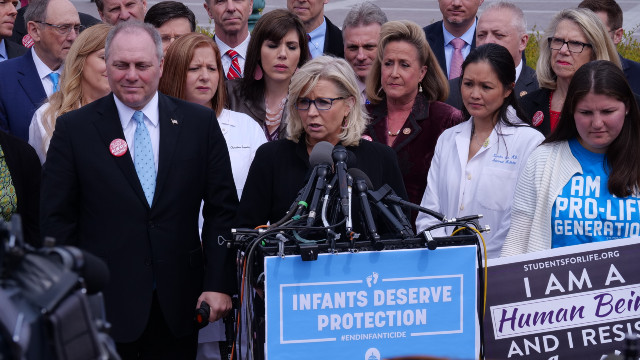 House Republicans voted on Wednesday morning to give Rep. Liz Cheney the boot from her leadership position due to her anti-Trump stance and voting in favor of impeaching the former president during his second impeachment trial.

Cheney was formerly the House GOP conference chairwoman, which is the third highest ranking Republican in the chamber. The vote was conducted as a voice vote according to Rep. Adam Kinzinger.

After she got her pink slip from the position, Cheney told the media she would pour all her effort into making sure Donald Trump was never elected again.

Gee, that seems like a very mature response, doesn’t it? Guess she didn’t learn anything from her first mistake.

via Just The News:

Cheney survived a vote earlier this year to remove her, after she voted in favor of impeaching President Trump following the Jan. 6 Capitol riot. She failed to survive a second vote on Wednesday after she continued to publicly feud with the former president over his claims about widespread 2020 election fraud.

“I will do everything I can to ensure that the former President never again gets anywhere near the Oval Office,” Cheney said after the vote to remove her as conference chair. “We have seen the danger that he continues to provoke with his language. We have seen his lack of commitment and dedication to the constitution and I think it’s very important that we make sure whomever we elect is somebody who will be faithful to the constitution.”

House Republicans say the public spat became a distraction and interfered with their agenda, which has taking control of the chamber in next year’s midterms at the top of the list.

Several other Republicans, including individuals in the House Freedom Caucus have not been impressed with Stefanik’s voting record on controversial issues like illegal immigration.

The vote for Cheney’s replacement will likely happen at an upcoming GOP conference meeting due to the timing of President Biden’s meeting with GOP leaders at the White House happening Wednesday.