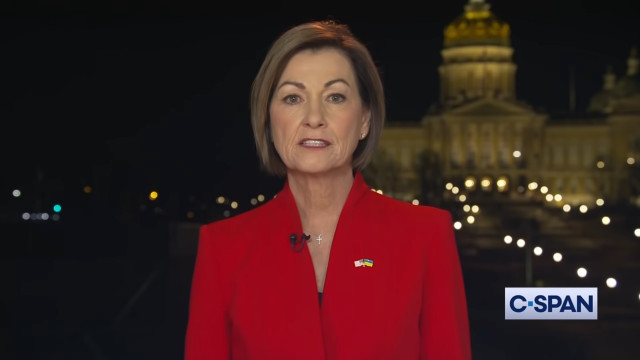 Iowa Republican Gov. Kim Reynolds delivered the official Republican Party response to President Joe Biden’s State of the Union address Tuesday evening, placing special emphasis on the fact that parents matter and that the policies of the Biden administration are making it hard — and even dangerous — to raise a family in modern America.

“We’re now one year into his presidency, and instead of moving America forward, it feels like President Biden and his party have sent us back in time—to the late 70s and early 80s,” Reynolds zinged, “When runaway inflation was hammering families, a violent crime wave was crashing on our cities, and the Soviet army was trying to redraw the world map.”

Reynolds then ran down a litany of foreign policy disasters —including North Korea, the botched Afghanistan withdrawal, and the war in Ukraine — noting that weakness “on the world stage has a cost. And the President’s approach to foreign policy has consistently been too little, too late.”

“It’s time for America to once again project confidence; it’s time to be decisive. It’s time to lead,” Reynolds went on to say in the response. “But we cannot project strength abroad if we’re weak at home.”

Reynolds also said that for many Americans, the country has become unrecognizable from a year ago and that people are waiting for the “insanity” to stop.

“We now live in a country where violent crime is out of control, liberal prosecutors are letting criminals off easy, and many prominent Democrats still want to defund the police,” Reynolds said.

“It seems like everything is backwards. The Biden Administration requires vaccines for Americans who want to go to work or protect this country but not for migrants who illegally cross the border,” she continued. “The Department of Justice treats parents like domestic terrorists but looters and shoplifters roam free.”

“The American people are left to feel like they’re the enemy,” Reynolds added.

“This is not the same country it was a year ago. The President tried to paint a different picture tonight, but his actions over the last twelve months don’t match the rhetoric. It’s not what he promised when he took office,” she stated.

However, Reynolds did offer an alternative way that life could be, one that’s focused on parents and a government that’s “working well but operating in the background. It’s supporting the ingenuity and spirit of our people, not drowning them out. It’s keeping them safe, not restricting their freedom.”

“Reynolds noted that during COVID-19, many blue states shut down and kept kids out of the classroom while GOP governors “actually listened to the science” and kept schools open,” the report from the Daily Wire stated.

She then pointed out the fact that many border states have decided to take matters into their own hands when it comes to border security.

Reynolds then closed at the SOTU response by stating that where Biden fails, which is basically every issue, the Republican Party is leading the way.

We are standing up for parents and kids; we’re standing up for life. We’re keeping our communities safe and thanking those in uniform.  We’re fighting to restore America’s energy independence, including biofuels. We’re getting people back to work, not paying them to stay home. Most of all, we’re respecting your freedom.

“Reynolds also hammered the president’s economic woes, stating when she was a young mom 40 years ago — the last time inflation was as bad as it today — she could ‘see the pain of inflation on my neighbors’ faces; I saw what happens when prices rise faster than wages’ while working at the grocery store cash register, but today ‘you don’t have to check groceries to see what high inflation does to people,’ Biden and the Democrats ‘just need to step outside the D.C. Bubble,'” the Daily Wire reported.