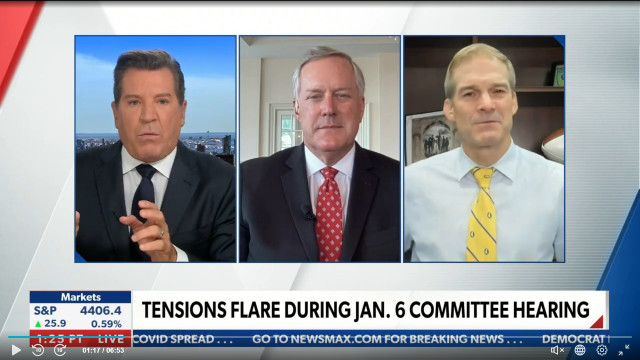 Former White House Chief of Staff Mark Meadows, along with Rep. Jim Jordan of Ohio, sat down with Newsmax on Wednesday where they ripped into House Speaker Nancy Pelosi’s House Select Committee that is set to investigate the Capitol riot back on January 6, calling it a “partisan sham” that’s designed to be an attack on former President Donald Trump rather than actually getting to the root of what caused the incident.

“This is impeachment 3.0,” Meadows said during the interview that took place as part of the premiere of Newsmax’s “Eric Bolling The Balance” Wednesday. “This is just a partisan sham; they have already drawn their final conclusions. In fact, they could write the final report right now.”

Jordan, one of two Republicans named to the committee that House Speaker Nancy Pelosi, D-Calif., rejected, agreed that the committee is only looking to smear the former president, or they would have accepted him and Rep. Jim Banks, R-Ind., on the committee and allow them to ask pointed questions about why the Capitol Police seemed so unprepared for the riot.

“This is completely partisan,” Jordan went on to say. “The country sees it for what it is.”

Five people died and more than 100 more injured when a group of President Trump supporters stormed the U.S. Capitol on Jan. 6 to try and disrupt a joint session of Congress tallying the final Electoral College votes for the 2020 election.

The House voted to impeach Trump for “inciting” the violence when he spoke to supporters at a rally earlier in the day.

The Senate then voted to acquit the former president on the charge brought against him.

Pelosi has been in full witch hunt mode ever since. And she’s made it clear by rejecting Rep. Jordan and other Republicans from the committee that this is not at all about getting to the truth behind the riot. It’s all about creating a narrative that bashes conservatives and paints them up to be the bad guys.