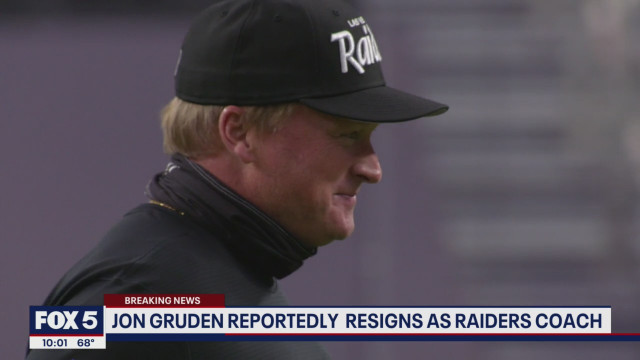 Jon Gruden, the head coach for the Las Vegas Raiders announced Monday night that he would be resigning from his position after a string of prior personal emails were leaked that offended a gay football player, denounced the national anthem protests, used racially charged language, offended female referees, and then went on to slam President Joe Biden as a “p***y.”

The emails in question were from a period of time between 2011 and 2018. In one of those messages, Gruden took a big shot at then-vice president Joe Biden, calling him a “nervous clueless p***y,” according to new reports published from the New York Times.

The coach, who was a Super Bowl champion back in 2002, also referred to NFL Commissioner Roger Goodell as a “fa****” and a “clueless anti-football p***y.”

Gruden also wrote that Goodell shouldn’t have pressured the then-St. Louis Rams to draft “queers,” a supposed reference to Michael Sam, an openly gay player selected in the 2014 draft.

Prior to his announcement, Gruden was ripped for his remarks, especially those referring to DeMaurice Smith, the executive director of the NFL Players Association, the report said.

“Dumboriss Smith has lips the size of Michelin tires,” he stated.

The NFL sent the Raiders additional Jon Gruden emails to review on top of the negative one that surfaced last week and, per sources around the league, the NFL is actively monitoring the situation and waiting to see how the team will handle the matter.

The comment was deemed racist, and Gruden received backlash from players, pundits, fans, and the league, the report said.

“The NFL sent the Raiders additional Jon Gruden emails to review on top of the negative one that surfaced last week and, per sources around the league, the NFL is actively monitoring the situation and waiting to see how the team will handle the matter,” a source later told the folks over at ESPN .

“Thank you to all the players, coaches, staff, and fans of Raider Nation. I’m sorry, I never meant to hurt anyone,” Gruden stated.