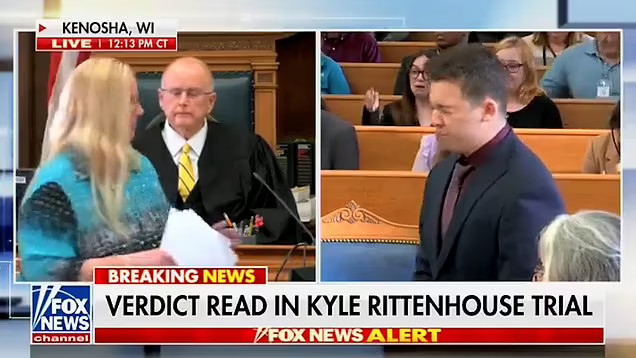 Kyle Rittenhouse just got some fantastic news after three and a half days of deliberation a jury has come back with a not guilty verdict concerning all the charges he was facing.

Rittenhouse was forced to use lethal self-defense by shooting three men with an AR-15 after he was being pursued by them during a Black Lives Matter riot that took place in 2020 in the city of Kenosha, Wisconsin. Two men died and the third was injured.

A 12-member jury found Rittenhouse, 18, not guilty on two counts of homicide, one count of attempted homicide and two counts of recklessly endangering safety during street protests marred by arson, rioting and looting on Aug. 25, 2020 in the working-class city of Kenosha.

Rittenhouse broke down sobbing after the verdict, which came shortly after the judge warned the courtroom to remain silent or be removed.

The jury deliberated for close to 3 1/2 days.

“The charges against (the) defendant on all counts are dismissed with prejudice and he’s released from the obligation of his bond,” Judge Bruce Schroeder remarked to the court.

As the judge dismissed the jurors, he assured them that the court would take “every measure” possible to keep them safe.

A deputy with the sheriff’s department immediately took Rittenhouse and ushered him through a back door located in the judge’s chambers.

“Rittenhouse’s mother, sitting several feet away from him on a courtroom bench, gasped in delight and began crying as the clerk read out the string of five not-guilty verdicts, hugging others around her,” the report said.

Conservative voices all across the United States were happy with the verdict and went on to condemn the fact these charges were ever brought against the young man in the first place.

“All of us who knew what actually happened in Kenosha last year assumed this would be the verdict,” Republican former Wisconsin Gov. Scott Walker said in a post published on Twitter. “Thankfully, the jury thought the same.”

In what will likely be no surprise to anyone black Lt. Gov. Mandela Barnes, who is currently running for the U.S. Senate, was none too happy with the outcome.

“Over the last few weeks, many dreaded the outcome we just witnessed,” Barnes commented. “The presumption of innocence until proven guilty is what we should expect from our judicial system, but that standard is not always applied equally. We have seen so many black and brown youth killed, only to be put on trial posthumously, while the innocence of Kyle Rittenhouse was virtually demanded by the judge.”

If he would’ve been found guilty on the charge of first-degree intentional homicide, there was a possibility the 18-year-old Rittenhouse might have served a life sentence in prison.