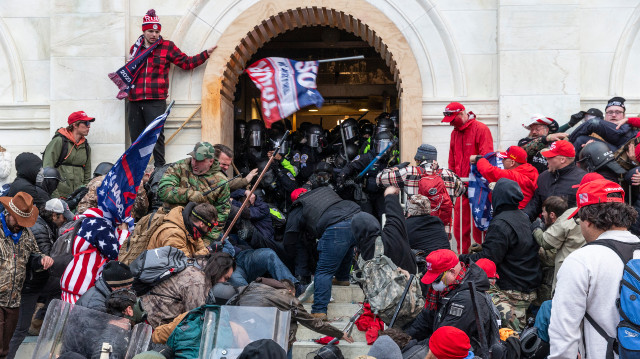 In a very shocking new survey that is surely going to draw a whole lot of attention from folks on either side of the political divide, nearly half of all voters believe that the individuals being held and charged in the Capitol riots are political prisoners.

A brand new Rasmussen poll reveals that 49 percent of those who have been put in jail for violence and other charges in the riots that took place that day are being held as “political prisoners.” Another 30 percent “strongly agree” with that statement.

Only 42 percent disagree with the statement. Now here’s where things get interesting. Apparently, 42 percent of Democrats also agree that the more than 500 people arrested for this incident are political prisoners.

Asked to agree or disagree with this statement: “The Department of Justice and the FBI have targeted, imprisoned, and persecuted non-violent American patriots,” 48% agreed, and 46% disagreed.

The findings are surprising considering the general negative media coverage of the pro-Trump riots that led to the U.S. Capitol Police killing of one protester, Ashli Babbitt, as she tried to enter the House floor.

The survey comes in advance of the weekend “Justice for J6” rally, when about 700 are expected to speak out in support of those arrested and targeted in the protest described as an “insurrection” and worse than 9/11 in the liberal media.

Here is Look Ahead America's Attendee Guidance for the #JusticeforJ6 Rally on Saturday, September 18 at noon at the US Capitol.

It seems like a lot of regular folks are starting to wake up to the twisted nature of our current political climate. This is good news. We need more people to wake up and help get this nation back on track. Elitists in both parties have been working hard to destroy our country. We must join forces to stop that from happening.