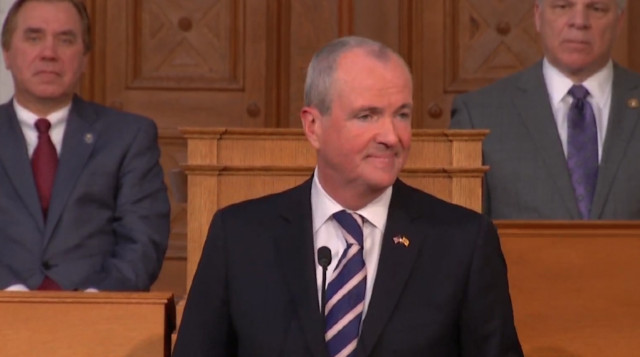 Gov. Phil Murphy of New Jersey was caught in some recent photos ditching his mask while attending an event hosted by an LGBT organization last week, despite the fact he made strong recommendations from his office that other individuals who were attending the event to wear masks and even created a mandate for schoolchildren to mask up as well.

This is the very definition of hypocrisy, folks. Leftists always want you and I to do things that they themselves think they are above. It’s elitism and it has no place in America.

Murphy attended the annual Equality Ball for Garden State Equality along with other top New Jersey Democrats, and pictures posted on Twitter by the state’s attorney general showed large groups of guests together without masks . The event required proof of vaccination or a negative COVID-19 test.

Tonight, I was honored to join @GovMurphy along with LGBTQ+ advocates, community members, and public officials from across New Jersey for @GSEquality's annual Equality Ball.

Proud to be part of a community committed to equal justice for every resident of this state. pic.twitter.com/mrLbcjCv8M

“At the very same time that this Governor issued another EO mandating two-year-olds wear masks for upwards of 7 hours a day because of purported ‘safety,’ the New Jersey political democratic elite gathered maskless by the thousands at multiple indoor events throughout the State, including in ‘high-risk’ Asbury Park, Bergen and Hudson Counties,” state Sen. Holly Schepisi went on to say during a chat with Fox News.

Schepisi’s colleague in the Senate, Michael Testa, also hammered on Murphy for his hypocrisy, stating, “We can imagine King Murphy saying to the laughter of his court, ‘Let them wear masks.'”

Murphy defended his policies back on Sept. 22, going on to state, “We know that masks work.”

Do we really? I mean, I think the science on this particular topic is pretty inconsistent, though the vast majority seems to indicate that masks are actually useless, but hey, when you’re an elitist, you get to call the shots and make up the facts, right?

Just last month, Murphy instituted a mask mandate for schools and then “strongly recommended” folks mask up indoors regardless of their vaccine status.

The New Jersey governor is up for reelection this November, which means that he ought to be fairly concerned with his hypocrisy being exposed, seeing as how the voters view the handling of the coronavirus is the top issue folks are worried about it.