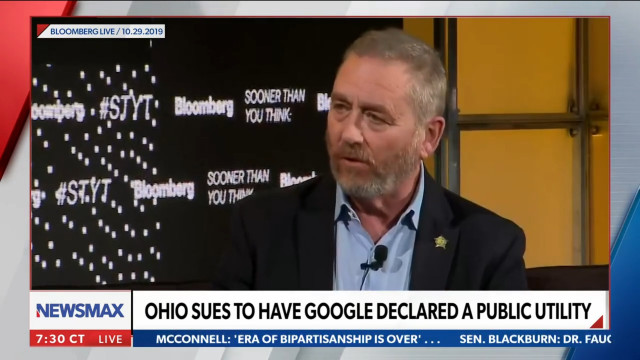 During a recent appearance on Newsmax, Ohio Attorney General David Yost, who has filed an anti-competition lawsuit against tech giant Google, stated that he doesn’t want to put the company out of business, but does want to see it declared a public utility and be brought under state regulations.

Yost went on to say that he’s hesitant to make any sort of predictions about how the lawsuit will turn out or how it might impact the company, but he wants to see Google comply with what he referred to as “certain legal duties.”

“Once we get this, the court to declare them as a public utility, then they will have a duty to provide equal access to act in the public interest,” Yost, a Republican, went on to say during the interview. “They say that their slogan is to do the right thing. Well, Ohio law tells you when you’re a public utility what the right thing is to do, and so we’re hoping that this is not going to bring the heavy hand of government down, but to recognize that they’ve got gotten so big that they’ve got a legal duty to all the rest of us that they have to live up to.”

The complaint is the first such lawsuit against Google by a state. It alleges the company has used its dominance as a search engine to favor its own products over “organic search results” in a way that “intentionally disadvantages competitors.”

Yost also commented Wednesday on various other lawsuits that have been brought against other companies like Facebook and said he thinks it is a “significant challenge” to deal with corporations that insist on regulating free speech.

“These are like the robber barons in the Industrial age that gained a huge amount of power and were able to have the size and scope of a government,” the attorney general said. “Some of these tech giants have gotten so large that they can do what the government could not do, which is to control what you’re allowed to say and hear and know about.”

“I think it’s time to recognize that when a company becomes as powerful as a government, it’s time to be asking some serious questions about our freedom,” he added.

Yost went on to point out that when companies get to that level and start censoring conservative voices, including the president, this leads to an imposition of political beliefs on business decisions and that’s not a good idea.

“They’ve got a set of values, which they’re allowed to have,” he stated. “This is America. They’re allowed to be liberal or progressive or whatever they want. The challenge comes when they use their power to affect the rest of us.”