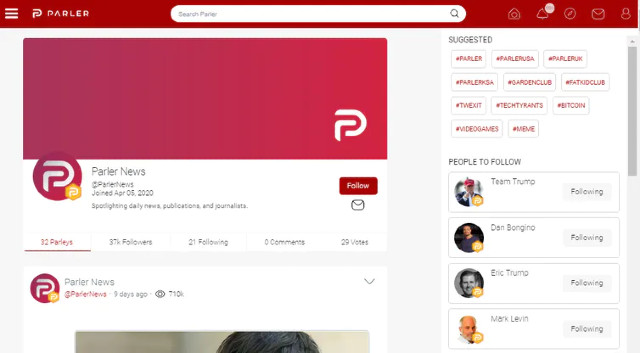 Earlier this week, Big Tech companies decided to make a strategic assault on the First Amendment by attacking alternates to the major social media networks like Twitter by stripping newer app Parler of its web servers.

Well, it appears that Parler will live again, as it’s found a new company to partner with in order to keep the service up and running.

On Monday, it was revealed that Parler registered its domain name and server to be hosted by Epik, an internet webhosting company that has a reputation for working with right-leaning websites. Another major player in the alternative social media market is Gab. They too use Epik.

Epik put out a statement on Monday claiming it had no discussion of providing future services to Parler. Epik did acknowledge, however, that Parler was “working on satisfying the requested terms placed upon them.”

Epik also defended Parler and said that it was being unfairly treated in comparison to its larger competitors Twitter and Facebook, which create an “undeniable double standard” when it comes to their policing and enforcement of content.

Earlier Monday, Amazon stopped providing cloud services to Parler, causing the website to go offline. Apple and Google have also removed the Parler app from their platforms. These actions have brought the platform to a standstill, just days after it was the most downloaded application in the country on Friday.

Parler filed a lawsuit against Amazon on Monday, alleging that the company’s actions are anti-competitive, unfair, and completely politically motivated. After all, Twitter, which is also hosted by Amazon, has similar content posted on it, but they haven’t been booted yet. Kind of seems like playing favorites, right?

The company also stated in the lawsuit that without the support of Amazon, “Parler is finished as it has no way to get online. They also said that being forced to switch over to a new service provider would require changes to their website that could result in the platform being down for a “financially devastating period.”

This is an all out assault on free speech. You see, they don’t need to decree a government order to violate the First Amendment. Social media platforms hold all the power now. By silencing a certain segment of the population with a certain set of political values, you make it impossible for them to share their message.

It’s crushing the opposition without technically violating the Constitution. Something must be done about this. Fast.