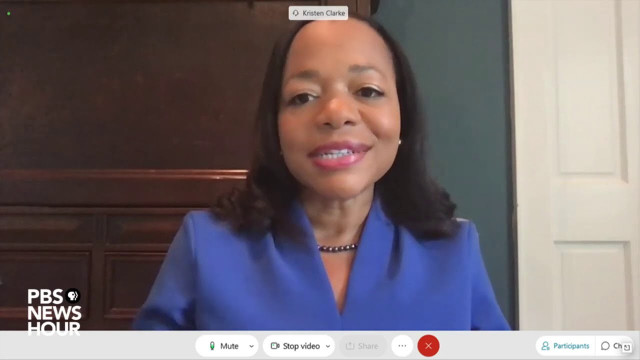 The incoming civil rights head for the Justice Department is not a big fan of consistently applying standards across the board for all people, a fact her previous history makes abundantly clear.

NAACP attorney, Kristen Clarke, is notorious for opposing civil rights prosecutions when it comes to black defendants, because, well, only white people can be racist. Duh!

Clarke has slammed the Justice Department for daring to bring up a complaint against an African-American party boss from Mississippi who put a lot of effort into suppressing white votes according to information unearthed in a federal probe.

Not only that, but a federal oversight commission has previously investigated Clarke for working with folks at the Justice Department to help cast aside the prosecution of Black Panther members who intimidated voters outside a Philadelphia precinct back in 2008.

Clarke made waves in 2007 as an outside critic of the Justice Department’s civil prosecution of a corrupt party leader in Mississippi. A federal judge found that the leader, Ike Brown, violated the Voting Rights Act by suppressing white votes in a rural Mississippi county where whites are the minority. He was found to have pushed election workers to count deficient absentee ballots from blacks but disqualify ballots from whites with the same problems and held rigged caucuses in the homes of friends and supporters.

Then legal director of the NAACP’s Legal Defense Fund, Clarke opposed the Justice Department’s decision to prosecute him, according to 2010 testimony from Justice Department official Christopher Coates before the U.S. Civil Rights Commission.

There are still a lot of questions concerning Clarke’s involvement in the Justice Department’s abandonment of the prosecution of two uniform wearing members of the Black Panthers who intimidated voters at a precinct in Philadelphia. A report from within the Justice Department stated that the pair shouted foul racial epithets and castigated a black couple who were working as poll watchers for the GOP. Oh and one of them was armed with a billy club.

Federal prosecutors actually brought a civil complaint against the two individuals in 2009, stating the actions they took were in violation of the Voting Rights Act. The defendants themselves never responded to the complaint, which is a forfeit, so the government was all set to win the case by default.

Just before victory was declared, in May of 2009, the DOJ dropped one of the cases and then recommended reduced sentencing for the other.

Clarke’s involvement in the matter was then investigated by USCCR. Clarke stated in a deposition before the Civil Rights Commission the next year that she did in fact make contact with two DOJ lawyers about the case, but then denied these contacts were substantive.

No matter how you slice the cake, Clarke is bad news. Another horrible pick from Biden, as he continues to fill Congress with hypocrites of the highest order.