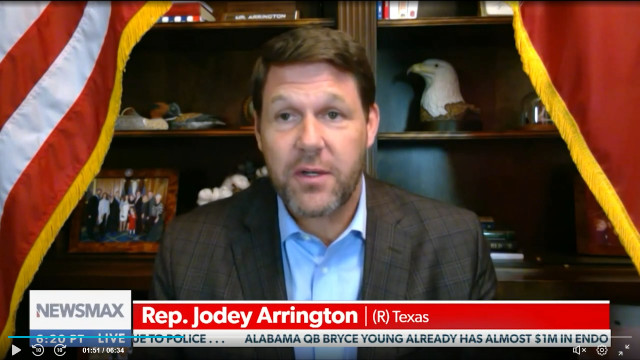 Rep. Jodey Arrington recently appeared on Newsmax where she totally unleashed on House Speaker Nancy Pelosi, stating that she should not be dictating the Jan. 6 panel’s investigation, but should actually be the “target” of it.

“There’s a major conflict of interest here, starting with Nancy Pelosi,” Arrington stated during his chat on Wednesday’s “Cortes & Pellegrino.” “And there’s a reason why she wants to be able to screen anybody that would serve on this committee, and that is she is the top of the food chain.”

“She is the chief executive of all of the U.S. House administration – Sergeant at Arms reports to her, the Capitol Police report to her. If there was going to need back up in the form of the National Guard, she would make that request,” Arrington went on to say, adding, “She should be a target of this investigation.”

Arrington told co-hosts Steve Cortes and Jenn Pellegrino that Pelosi’s power wielding in dictating the committee can cover up her own accountability, because she, not former President Donald Trump was responsible for the security of the Capitol Building on Jan. 6.

Pelosi rejected a pair of House Minority Leader Kevin McCarthy’s five Republican nominees for the committee, causing the GOP leader to pull out of participating in her investigation and starting the GOP’s own investigation.

“Her being able to screen out the folks that would be on this, again, it’s a major conflict of interest, and it’s a way to prevent her from being scrutinized and being in the spotlight as the ultimate accountability for the sixth,” the congressman said.

Pelosi’s committee will be more of duplication of the Democrats’ narrative on the Jan. 6 storming of the Capitol, he continued.

“We have a number of oversight committees investigating this and fact finding, and I think that there’s more than enough evidence to find the solutions to preventing this from happening in the future,” he said.

Arrington then went on to rip the investigation which is totally in favor of the Democrats, calling it “Pelosi’s kangaroo court.”

“It’s a way to continue the obsession with Donald Trump, bring the antagonists back into Pelosi’s theater, because they can’t govern, and they’re fractured, and their radical agenda is the worst thing that’s happened to their party in a long time,” Arrington went on to say.

“And it’s driving people to the Republican column, and will hand us, I think, a historic win in 2022,” he said.