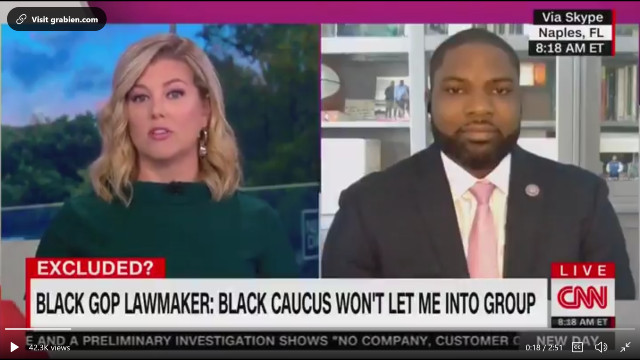 Rep. Byron Donalds, a Republican from Florida, recently tore deep into a CNN anchor on Thursday morning for suggesting that the Congressional Black Caucus is taking their sweet time with his admission due to the fact he’s a conservative and his values and ideas are “incongruous” with the mission of the CBC.

Donalds currently thinks that he is being denied entry into the group, which is no doubt the most powerful group of black lawmakers in Congress, due to the fact that he is a Republican.

“It’s been six months since the members who won election in 2020 were inducted into the CBC, a powerful and nominally nonpartisan group of Black lawmakers in Congress,” BuzzFeed News reported, per the Daily Wire. “Donalds, who won election for the first time last year, has not been included in that group.”

Donalds, though, says he has applied for admission, and that while his record is limited, it is largely bipartisan. He came to Congress after serving as the sole black Republican in Florida’s House, where he was also part of that body’s own black caucus, and he specifically wanted to become involved in the CBC once being elected to federal office.

In an interview with CNN Wednesday morning, however, Donalds faced pushback from CNN over his application to the CBC.

Anchor Brianna Keilar referred directly to Donalds’ pitch to the CBC, asking him whether his support for former President Donald Trump was “incongruent” with the “mission” of the Congressional Black Caucus.

“Do you think your defense of a person who said things like that might be incongruent with the mission of the CBC?” Keilar went on to ask, seemingly making a reference to what she thinks was Trump’s subtle admonition of “white supremacist” supporters.

“First of all, what the president said in the past has nothing to do with this discussion at all,” Donalds responded with conviction.

“You’ve defended him,” Keilar fired off.

After once again chastising Keilar for cutting him off while he  was in the middle of speaking, Donalds gets another good shot past the reporter’s proverbial guard.

“I think that it’s important, whether you’re talking about the Congressional Black Caucus of the Florida state legislative Black Caucus or the National Caucus of State Black Legislators — organizations I have been a part of in the past — my support of President Donald Trump has been consistent but, at the same time, I’ve had the ability to advocate for issues, ideas, proposals and funding that have helped the black community in my state,” he added.

“You’re talking to somebody who, my first three years in college was at Florida A&M, an HBCU, so whether my support for President Trump…whether it’s for or against is irrelevant. It has nothing to do with this discussion. This is whether the ideology of somebody who is conservative is welcome in the Congressional Black Caucus,” he said, adding, “It’s really that simple.”

“And so to bring up President Trump to try to make this about him does not matter. It’s irrelevant. It has nothing to do with the situation at hand,” Donalds went on to say.

CNN patronizes Rep. @ByronDonalds, a black GOP congressman, after he calls out the @TheBlackCaucus for denying him entry.

Keilar: Your ideas are “incongruous” with their “mission"

Donalds: "As a black man in America, I’m allowed to have my own thoughts" pic.twitter.com/vN9j4KXpNh