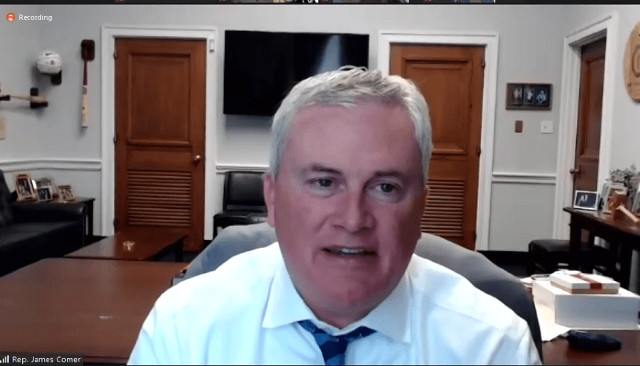 Rep. James Comer, a Republican from the Bluegrass State, recently told Newsmax that all of the infighting going on right now among progressives and the moderates in the Democratic Party concerning the two huge spending bills could end up being a “defining moment” for its future.

”I think we’re at a real defining moment for the Democrat Party right now, and it doesn’t look to me like they’re going to be able to get out of this,” Comer went on to say during an interview on Tuesday’s ”American Agenda.”

(Newsmax/”American Agenda”)
take our poll - story continues below
Completing this poll grants you access to Ken Blackwell updates free of charge. You may opt out at anytime. You also agree to this site's Privacy Policy and Terms of Use.

Rep. James Comer, R-Ky., told Newsmax that the infighting among progressives and moderates in the Democratic Party over two massive spending bills may be a ”defining moment” for its future.

”I think we’re at a real defining moment for the Democrat Party right now, and it doesn’t look to me like they’re going to be able to get out of this,” Comer said on Tuesday’s ”American Agenda.”

With a razor-thin majority in the House and a 50-50 split in the Senate (48 Democrats, 50 Republicans and two independents), House Speaker Nancy Pelosi, D-Calif., and Senate Majority Leader Chuck Schumer, D-N.Y., must have almost 100% Democratic support for the bill to pass.

Two moderate Democrats in the Senate, Joe Manchin of West Virginia and Kyrsten Sinema of Arizona, want to see the price of the bill drop, while House progressives led by the ”squad” of Reps. Alexandria Ocasio-Cortez, D-N.Y., Ilhan Omar, D- Minn., Ayanna Pressley, D-Mass., and Rashida Tlaib, D-Mich., are pushing to spend the entire amount.

Republicans in Congress have made it it clear they won’t be supporting the bill at all, which leaves the Democrats with basically zero wiggle room if the legislation comes to the floor for a vote.

Jen Psaki, the White House press secretary, stated on Tuesday that there are high-level talks and negotiations that are currently taking place between President Joe Biden’s administration and Democratic lawmakers.

”We are having an important discussion about what a package that is smaller than $3.5 trillion would look like,” Psaki stated during Tuesday’s press briefing. ”Those conversations have to happen with a range of [Democratic] members.”

Psaki then went on to state that the discussions have arrived at a point where “decisions have to be made” concerning which elements might be cut from the legislation in order to bring about an agreement.

“Comer said that the Republicans are likely to regain control of the House and Senate in 2022 because of the Democrats’ seeming inability to govern despite controlling the White House and both chambers of Congress,” the Newsmax report said.

”The Democrats have been in complete control over the past nine months, and nothing good has happened,” Comer concluded. ”Our economy has gone downhill. Our standing on the globe has deteriorated under Joe Biden’s leadership, morale in our military’s at an all-time low, and they have nothing in the works.”