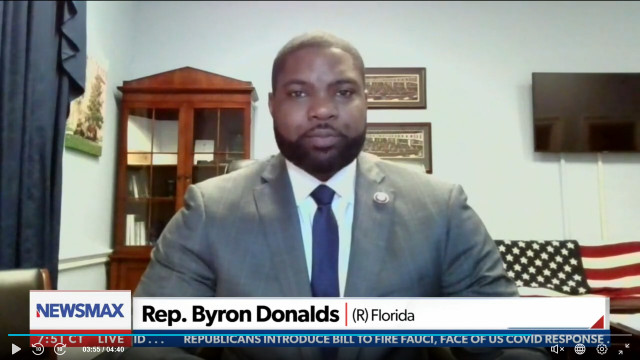 Rep. Byron Donalds, a Florida Republican, tore into Secretary of State Antony Blinken over his latest call for the United Nations to launch a probe into systemic racism in law enforcement, saying he’s “sick and tired” of progressives “thinking that everything they have to do” should be run through an international organization.

“Have we had racial issues? Of course, we have,” the Florida Republican said during his interview with Newsmax’s “National Report.” “That record has been examined far past any other country on the face of the planet. Let’s be clear. We’re the freest, most tolerant nation on Earth. It what happens when you have a free society and people do bad things and harm comes to certain people.”

He went on to say that the U.N. should begin its probe by looking into other countries.

“Start with Venezuela, which has destroyed the value and liberty of its people over the last 30 years,” said the congressman. “Look at what’s going on with Cuba right now, not just now, but over the last 62 years. What about China? What about Iran…looking at us? That makes no sense at all.”

Blinken said Tuesday that the State Department had invited experts who investigate racism and minority issues to conduct an official visit to the United States, because “responsible nations must not shrink from the scrutiny of their human rights record,” reports Reuters.

Blinken also said the United States welcomes the U.N. Human Rights Council and its adoption Tuesday for the resolution, which will address systemic racism through law enforcement against Africans and people of African descent.

However, Donalds said Thursday that the United States has been transparent because the “issues we’ve had on race relations have been under the microscope.”

Donalds stated it’s a “joke” to lump the United States in with countries like Haiti, Iran, China, and Cuba.

“This happens with the left all the time,” the congressman added. “They try to have this moral relativism so nobody is better than anybody else. It’s a joke. We are the country of liberty and hope in the world. Period, point-blank. U.N. countries can learn from us.”

Donalds also took a big shot at the Black Lives Matter statement that slammed the U.S. and it’s treatment of Cuba and the demands that our government lift economic embargo on the communist nation.

“Ridiculous,” Donalds stated. “Asinine. That statement makes no sense at all. If you lift the sanctions on Cuba, the regime will be more empowered. They’ll have more economic ability to continue to suppress the people of Cuba. This is what happens in all totalitarian regimes. When you allow them to flourish in the world economy, they don’t pass that down to the people. They keep it for the powerful, the 1% to use the left’s language.”

He went on to say that he finds it “ironic” that BLM went on to lead protests here in the streets just a year ago, but “they don’t want to put blame where blame resides. That’s with the communist dictatorship in Cuba.”