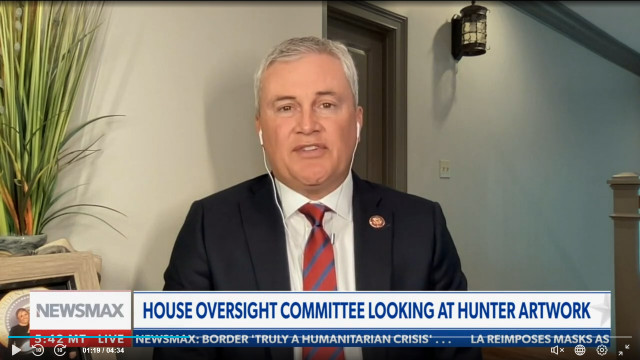 Republican Congressman James Comer of Kentucky recently sat down for a chat with the folks over at Newsmax where he said that not only does Hunter Biden’s profiteering off selling supposedly “high-end” artwork sold to anonymous buyers as a first-time artist smell of conflicts of interest, but also stinks to high heaven of Democrat hypocrisy.

“The White House needs to be transparent,” Comerstated during his interview on Thursday’s “Greg Kelly Reports.” ”We’ve asked some valid questions that I don’t think anyone in their right mind would consider partisan, especially when you consider the questions the Democrats on the Oversight Committee asked about the Trump children, when the Trump children were involved in the real estate business decades before Donald Trump ever ran for president.”

Comer went on to say that, “this doesn’t pass the smell test.”

“No sensible American would believe that Hunter Biden is first of all a desired pick to be on a board of a foreign national company, nor would they believe he is an artist who would command a half a million dollars for a piece of art,” the congressman said, adding, “This goes along with a pattern of conflicts of interest that we’ve seen with Hunter Biden and other members of the Biden family, and we’re asking questions.”

The White House has orchestrated a deal to keep Hunter Biden’s potential buyers for artwork confidential. The art is to be sold at a first-time show this fall, with pieces ranging in price from $75,000 to $500,000, according to the gallery brokering the sales.

“If I were Joe Biden in the White House, I would want to be transparent with this, because there are a lot of suspicious things taking place in the White House now with respect to China,” Comer went on to say.

“And the fact that Hunter Biden’s selling art to anonymous buyers, one might raise the question, is communist China one of the buyers? Is this the reason the Biden administration isn’t very interested in getting to the bottom of the origination of the COVID-19 virus?” He asked.

“There are so many questions that Republicans have that I think average Americans have about China and the Biden administration doesn’t seem interested,” Comer continued.

Notably, there is a Chinese term that means “elegant bribery” in the selling of subjective artwork, a “widespread” practice in China, The New York Times reported in 2014.

“But here we have Hunter Biden, with his newfound fame and fortune in artwork, so we have some questions,” Comer stated.

Also, Frank Biden, the president’s brother, is featured in Florida ads selling his consulting work for a law firm, where he acknowledges that he is a non-attorney beneficiary.

“Nobody has ever heard of anything like that,” the Kentucky congressman said. “It’s another conflict of interest. It’s another pattern by the Biden family of trying to profit off of Joe Biden. And this just didn’t begin when Joe Biden became president. This happened throughout the Obama-Biden years when Biden was vice president as well.”

“So, this is very unethical,” he concluded.