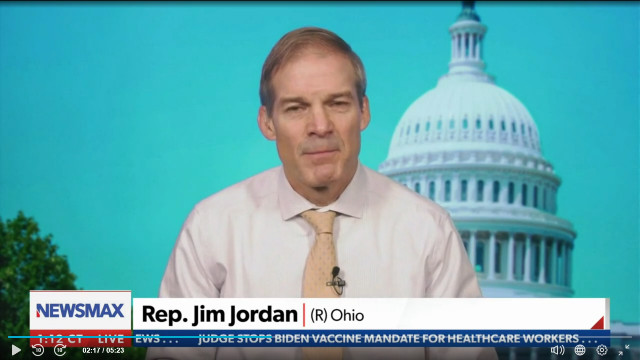 Ohio Republican Rep. Jim Jordan has come out and stated that the Democratic committees that are investigating the incident that took place on Jan. 6, 2021 at the U.S. Capitol building are carrying out a “political operation” designed to prevent former President Donald Trump from running for office again in 2024.

“There’s been subpoenas issued to 11 individuals, 11 American citizens who asked the government permission on an application to hold the Trump rally,” Jordan went on to  say.

“The government granted it and now the January 6 committee petitions them to ask them questions about exercising their First Amendment right to assemble,” he continued.

“And why would they subpoena me? I didn’t do anything wrong — I talked to the president,” Jordan added. “I talk to the president all the time. I just think that’s — you know where I’m at on this commission — this is all about going after President Trump. That seems obvious.”

Jordan went on to deliver more criticism saying that “everyone in the country sees this as a political operation. This is designed to get after President Trump. Because they don’t want him to run again.”

“A top Republican on the House committee that oversees U.S. Capitol security has also accused House Speaker Nancy Pelosi of a ‘cover-up,'” a report from Conservative Brief said.

“During an interview on John Solomon Reports podcast, Illinois GOP Rep. Rodney Davis said Pelosi is refusing to release key evidence showing the security planning prior to the Jan. 6 riots,” the report said.

“We know there were intelligence analysis failures at the Capitol Police,” Davis went on to say. “Our job is to protect the Capitol, and they’re making the same bad decisions.”

Capitol Police have made several changes and a few reforms in light of the events that transpired last year, but a few lawmakers are concerned that not enough changes were made.

“Davis accused Pelosi of blocking the release of information — including contemporaneous communications — showing what the Capitol Police and the House Sergeant at Arms discussed as security needs before a planned Jan. 6, 2021, protest by pro-Trump supporters that eventually spiraled out of control,” the report continued.

“They will not comply and give that info to us,” Davis said when speaking with Just the News.

“At a time when the Speaker through this sham Select Committee is asking and getting voluntarily thousands of communications from people who are no longer employed by the government, she is denying that committee of jurisdiction access to government communications. What is she hiding?” he went on to ask.

“All we ever asked for is we want communications leading up to and on Jan. 6, we want to be preserved, we want to be turned over to us, because my job, my job is to make sure that the Capitol is secure. And it’s laughable to think that that’s not germane to making sure that we don’t make those same mistakes again,” he remarked.

“I fully expect to be chairman when we take the majority. And I guarantee you, we will get these communications,” he stated. “But by then, it’s two years past the time when the American people should have seen what did, or in many cases, did not happen to prepare our cops and our security apparatus prior to January 6.”

The Illinois member of the GOP has sent out a formal request for the memos that are being withheld concerning the security lapses before and during the Jan. 6 incident.