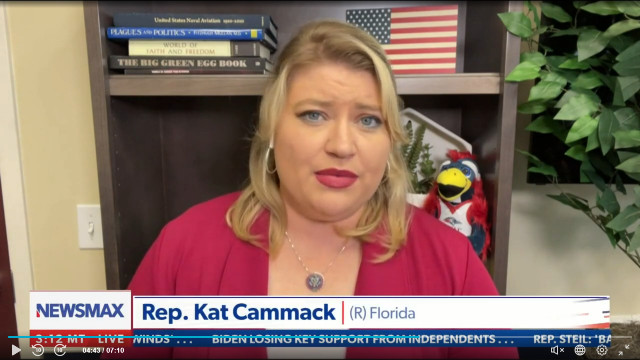 Rep. Kat Cammack, a Republican from Florida, ripped into Republicans last Friday, stating she’s “sick and tired” of weak GOP leadership not taking a stand against President Joe Biden and other Democrats that she says are running “lawless.”

”I ran for office because I was sick and tired of weak leadership, of weak Republicans not standing up for our Constitution and our country,” Cammack stated during the Friday edition of ”The Chris Salcedo Show.” ”No, we do not have the votes, but there is a litany of other things that we can be doing.”

Cammack expressed her frustration at Senate Minority Leader Mitch McConnell, R-Ky., for giving Democrats a way out of the debt ceiling dilemma by helping them pass a resolution to fund the government through December, effectively taking away Republicans’ leverage in trying to block two major Democratic spending bills.

”This latest capitulation on the debt ceiling is lost on me,” Cammack continued. ”Maybe I’m just too blond to figure it out, but I’m not quite sure where he thought it was a win to cave to [Senate Majority Leader Chuck] Schumer and the Democrats, which, as you pointed out, they turned around and kicked [Republicans] right in the teeth.”

After McConnell made it possible for the bipartisan vote to punt the debt ceiling increase to December, Schumer, D-N.Y., took to the Senate floor, blasting the GOP for being ”irresponsible” with its ”brinksmanship” on the issue.

”Republicans played a risky and partisan game, and I’m glad their brinksmanship did not work,” Schumer stated during his spiel. ”For the good of America’s families, for the good of our economy, Republicans must recognize in the future that they should approach fixing the debt limit in a bipartisan way.”

Schumer’s venom was unleashed because the GOP initially told Democrats that they would have to raise the debt limit on their own because they were unilaterally pushing through both the $1.2 trillion infrastructure bill and a $3.5 trillion budget reconciliation bill full of Democratic wish list items without any Republican votes in the Senate.

Meanwhile, Cammack said, the president continues to ignore a U.S. Supreme Court order to reinstate former President Donald Trump’s ”Remain in Mexico” policy for migrants who have entered the U.S. illegally. The policy would make them stay south of the border until their cases were heard in court.

If you remember correctly, President Biden actually signed an executive order during his first day in office to undo Trump’s immigration policy.

Ever since that day, more than a million migrants have made their way across the southern border, illegally, braking monthly records on a regular basis and somehow managing to top decades-old records for the number of illegal crossings, according to information released by Customs and Border Protection.

”If this administration will not call it or deem it a crisis, Congress sure as hell will,” Cammack went on to say. ”This provision includes troops getting sent to the border. So Biden can whine, bitch, moan and complain all he wants.”

”But he is going to have to, at some point or another, and of course, his infamous border ”czar,” Vice President [Kamala] Harris are going to have to come to terms with the fact that Congress has declared this a crisis, the congresswoman concluded.