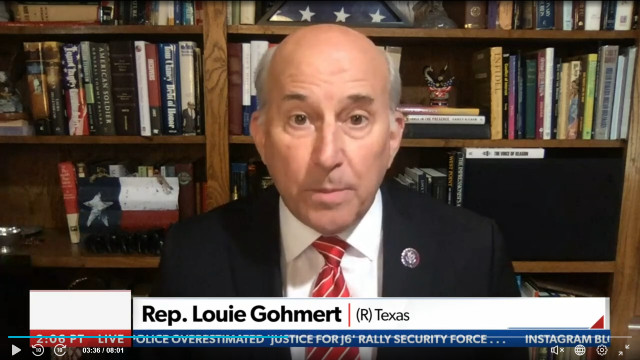 According to Texas Congressman Louie Gohmert, the horrifically awful energy policies coming out of the Biden administration are “costing people severely,” which, to be honest, is the only thing this president has managed to accomplish since taking office back in January.

What I mean is, of course, he’s done nothing but hurt the American people.

“It’s where Biden picked up from the (former President Barack) Obama administration, and where it’s heading (is) costing people severely,” Gohmert remarked during an interview on “American Agenda” Tuesday.

Gohmert then stated that President Joe Biden kicked off his administration by taking action to cancel the Keystone pipeline and has continued to take steps of opposition against other pipeline projects that would have helped to keep prices stable as we came out the coronavirus pandemic.

With gas prices at a 7-year high, Biden directed Department of Energy Secretary Jennifer Granholm to release 50 million barrels of oil from the U.S. Strategic Petroleum Reserve to try and “bridge” the crisis until prices go down after working with other countries, the agency announced Tuesday.

“As we come out of an unprecedented global economic shutdown, oil supply has not kept up with demand, forcing working families and businesses to pay the price,” Granholm went on to say in the announcement. “This action underscores the President’s commitment to using the tools available to bring down costs for working families and to continue our economic recovery.”

During a press briefing at the White House later in the day, Granholm said while professionals at the agency predict gas prices going down in 2022, the move to release some of the oil now, would “bridge” the current pricing crisis until the market goes back down.

“This administration realizes that people are seeing this every single day as they go to work, as they fill their cars with gas, and we also recognize who is hurt the most from this,” she went on to say during the press briefing held on Tuesday at the White House. “Low-income families spend up to 30% of their monthly income on fuel, on energy.”

Granholm then remarked that “no president” is in control of the price of gasoline because it is an international market, and then said the administration is seeing a “global mismatch” between the supply and demand for both oil and gasoline.

“Oil production is lagging behind as the rest of the economy roars back (from the COVID-19 pandemic) to life,” she stated. “We, and this administration, is leaving no stone unturned as we examine the market to figure out what’s behind the high prices.”

She then said that the U.S. is joining forces with several other countries that are now planning to tap reserves to help push out more oil into the market, which will hopefully lower prices over the course of the next several weeks.

All of this could have been avoided if the president hadn’t been opposed to all of the various pipeline projects. The man screwed up from the first moment he stepped into the White House.