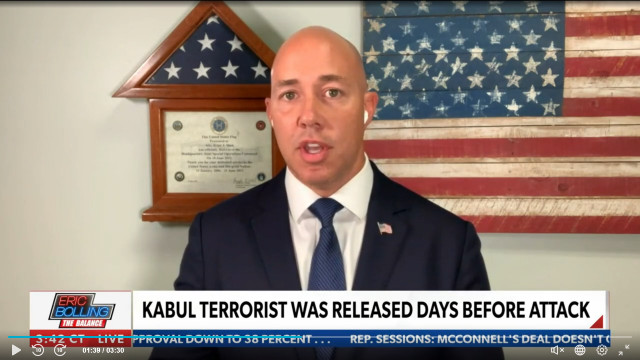 Rep. Brian Mast, who is a military veteran who lost his legs during an explosion that happened in Afghanistan, slammed President Joe Biden over the botched troop withdrawal from the country, going on to tell Newsmax that the whole debacle wasted 20 years of “blood, sweat, and tears.”

Mast, 41, who is a second-term Republican from the 18th Congressional District in the south-central portion of the state, shredded the president for his strategy, which included abandoning Bagram Airforce Base in the southeast part of Kabul, the nation’s capital. This decision is what allowed the Taliban to overrun the base, release 7,000 potentially dangerous prisoners, one of which was a suicide bomber who just days later blew himself up and killed 13 U.S. service members and 170 other individuals.

”This guy was given to the CIA by Indian intelligence because he got caught trying to set off a bomb in New Delhi,” Mast stated during an interview on ”Eric Bolling: The Balance.” “That’s what was going to happen. He was given over to the CIA.”

”President [Donald] Trump then had him interrogated, used him, got actionable intelligence out of him, and sent ordnance from drones to hit real targets, not the kind of targets Biden hit, hit real targets, kill ISIS terrorists. So, Trump used him to kill terrorists. Biden let him go, and he was able to kill Americans. That’s the compare and contrast that needs to be looked at here,” Mast continued.

Mast, an engineer who was awarded the Bronze Star for his time in Afghanistan, when he stepped on a bomb clearing a path for Army Rangers, said he was ”disgusted” with Biden.

”I’ve lost friends. I’ve lost limbs,” Mast added. ”Personally, I know a lot of others, literally hundreds of others, that that were injured in a host of different ways, not just the 13 Americans that were killed. There were also over [170] Afghanis that were killed there trying to flee Afghanistan. So, it goes well beyond just our losses as well.”

”And this is another one of these situations where president Biden p—-d away 20 years of blood, sweat and tears for this terrorist,” the army veteran said.