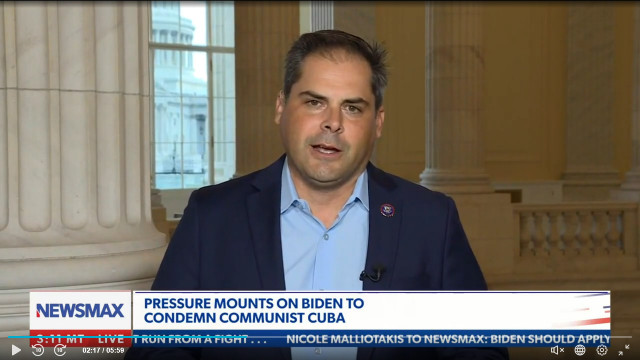 According to Rep. Mike Garcia, a Republican from California, the Biden administration is “hell bent” on helping “bad guys” during the civil unrest tearing through Cuba right now.

“The second thing (Biden) is proving is actually this administration is hell bent on providing hope to the bad guys,” Garcia said during an interview he did for “The Chris Salcedo Show.” “This is a continuation of what we’ve seen over the last six months where he doesn’t condemn Russia for its cyber-attacks.”

“He tells them which ones not to touch. He allows sanctions against (the) Nord Stream 2 pipeline in Germany to be lifted. He gave the Taliban (in Afghanistan) an unconditional surrender and withdrawal opportunity within the prescribed date, giving them hope. He’s told Iran that he’s going to get back into the nuclear deal, even though they haven’t necessarily asked us to,” Garcia said.

“He’s lifted gas sanctions against Venezuela. He’s not holding China accountable for the origination of COVID and the spread of COVID worldwide, and now on our southern border, he’s enabling the cartels to effectively run rampant through our neighborhoods and throughout the entire nation with a completely open border policy. So, to see what’s happening now in Cuba, where we have an opportunity to do something right for the good guys, and they’re choosing to do something for the bad guys, in this case, the Cuban government, is not surprising,” he continued.

Garcia was reacting in part to comments made Wednesday by Cuban-born Homeland Security Secretary Alejandro Mayorkas who told potential refugees that the United States would not provide them sanctuary if they decided to try and sail to America from the island nation just 90 miles off the Florida coast.

“The time is never right to attempt migration by sea,” Mayorkas said in a press conference at the U.S. Coast Guard Headquarters. “To those who risk their lives doing so, this risk is not worth taking. Allow me to be clear: If you take to the sea, you will not come to the United States. Any migrant intercepted at sea, regardless of their nationality, will not be permitted to enter the United States.”

His admonition comes after days of continued protests against the Castro regime in the Communist country, with thousands taking to the streets in the capital of Havana and other cities, chanting “freedom” and displaying American flags in rebuke of the 62-year old revolutionary government.

While Biden has publicly expressed solidarity with the people of Cuba, the administration has not put out any concrete plans to help them, compared to sending investigators to Haiti following the assassination of its President, Jovenel Moise, at his home on July 7, when the Haitians asked for help.

Garcia then went on to state that despite Mayorkas being of Cuban heritage, he doesn’t fully get just how important the current uprising really is and how much it could impact America’s relationship with Cuba.

“(Mayorkas has) proved a couple points, one as a Cuban immigrant himself, he really doesn’t understand the opportunity that Cubans in Cuba have right now and how critical it would be right now for the United States to stand behind them and actually help and enable them,” the congressman said.