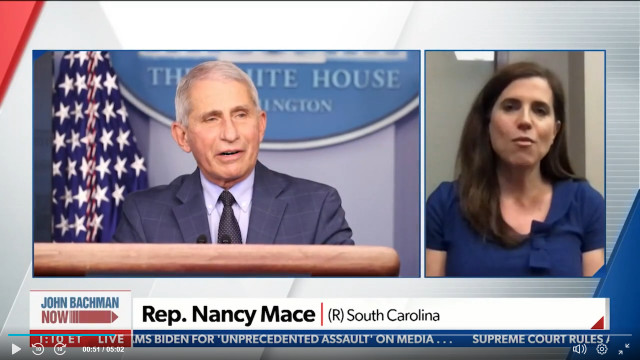 Rep. Nancy Mace, a Republican from South Carolina recently made an appearance on the Newsmax program, “John Bachman Now,” on Monday where she responded to comments made by House Minority Leader Kevin McCarthy over the weekend in which he called for Dr. Fauci to “leave his post” because the American people “don’t have trust in him.”

“I loved hearing Kevin McCarthy say that this weekend,” Mace said during the program, adding, “I fully support it, wholeheartedly support it.”

She says she supports that call because “Fauci hasn’t been honest with the American people.”

“First, it was masks – saying that they ‘wouldn’t protect us from COVID-19, not to wear them’ – then [he] said, ‘Oh, yes, later on you’ve got to wear them’ having more power and control over the American people, doing a great disservice to us,” she went on to say.

Mace stated that she takes issue “with those 900 emails that were released last week.”

And these emails aren’t the only big concerns Mace has.

“She needs to be held accountable – 140 days in and not a single visit” to the border, she said.