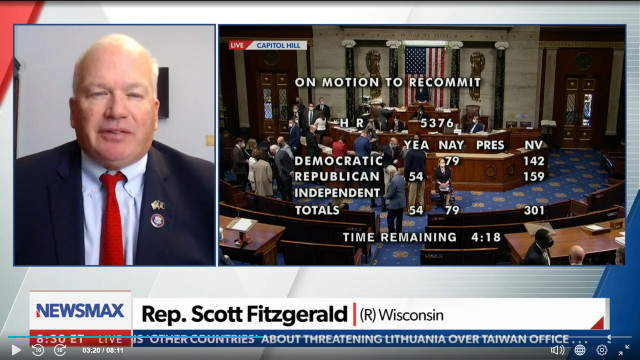 According to Rep. Scott Fitzgerald, who had a conversation on conservative leaning news network Newsmax Friday, several Democrats in Congress whose hold on their seats was already tenuous, might be kissing their chances of reelection in 2022 goodbye with the passage of the “Build Back Better” legislation, which he called the “nail in the coffin.”

“This bill is something that is not going to be easy to sell when you get back home, the Wisconsin member of the GOP remarked during a chat on Newsmax’s “Wake Up America.” “I don’t know what Speaker [Nancy] Pelosi has promised some of these moderate members, but it better be something that is politically very helpful, because, I’m telling you that this is the type of thing that when you get back home in front of the Chamber of Commerce, good luck trying to explain it.”

“[He] took it upon himself to carry the torch,” said the congressman. “I thought he did a great job of delivering the message in many different ways. But you know, this is the bogus ‘Build Back Better’ bill. It’s just become evident, the lies that have been kind of thrown out there over the last three weeks by the president of the United States and the speaker of the House that this thing is not paid for.”

According to the long-awaited Congressional Budget Office score released Thursday the bill will increase the budget deficit by $367 billion between the years 2022 to 2031. The Treasury Department, however, says the IRS collections, through bringing in thousands of investigative agents, will bring in $400 billion to pay for the plan’s shortfalls.

The CBO report, however, said such collections will bring in about $127 billion in net revenue, leaving the bill’s spending some $250 billion short of being fully offset by the collections.

“Think of it; 80,000 new agents — enough to fill any football stadium in America — and the bottom line is, what they do is a little bit of an accounting trick,” declared Fitzgerald. “Basically what the CBO is saying is that you can’t necessarily count on that revenue. It creates a hole before the bill even passes and not only that, but the scrutiny on the American public is something that I think people are going to be very upset about.”

The Build Back Better bill isn’t the only thing sinking the Democratic Party’s chances at pulling down major victories next year.

President Joe Biden, right now, has extremely low approval ratings, which is going to absolutely kill other Democrats trying to run for reelection. Folks are unhappy with Biden due to his botched Afghanistan troop withdrawal, the supply chain crisis, the border crisis, and the fact that the COVID pandemic is still hitting hard.

There’s a lot working against them. Fitzgerald is right. Supporting this bill was a really dumb move.