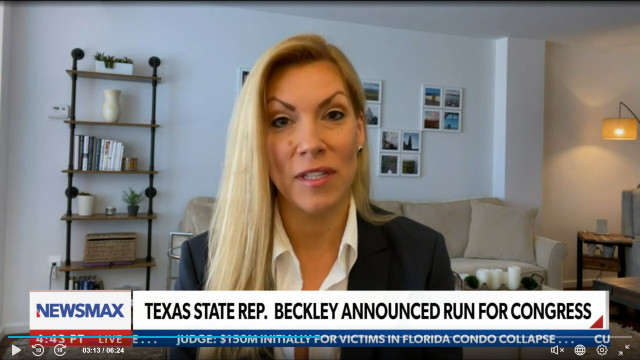 Rep. Beth Van Duyne delivered a one-two punch to her newest competitor for her House, Texas state Rep. Michelle Beckley, telling the folks at Newsmax that “this woman wants to do my job when she can’t even show up to do hers.”

“You make a pledge to your constituents that you’re going to be there for them,” Van Duyne, R-Texas, went on to say during Newsmax’s “Wake Up America” program. “This woman has completely abdicated her post.”

Beckley revealed the plans she has from her hotel room in Washington, D.C. on Thursday, where she’s been staying since leaving Texas along with other Democrats to try and block a GOP bill on voting reform.

In her video, Beckley compared her commitment to the fight against the voting legislation with Van Duyne’s vote from earlier this year objecting to Pennsylvania’s results for the 2020 election.

“Beth Van Duyne can walk away from her duty to defend democracy, but not me,” Beckley stated in the video.

Van Duyne pointed out Thursday that Beckley and the other Democrats are the ones who are running from a fight.

“If you know anything about Texans, staying with the fight, that’s what you got elected to do,” Van Duyne went on to say. “As an elected official, you make an oath. You make a pledge to your constituents that you’re going to be there for them.”

The Texas Democrats have compared themselves to the Freedom Riders who fought against segregation during the 1960s, and Beckley referred to herself as brave in the video, but Van Duyne said there is no comparison.

“They’re being received by open arms by the vice president and others here,” and then going on to enjoy luxury travel and hotel accommodations, the congresswoman said. “I do know that while they’re gone the work that needs to get done in Texas is not getting done because they are not there.”

Van Duyne then noted that people are very frustrated with all of this.

In addition, people who have had to fight for their rights have suffered, the lawmaker said, but the Texas contingent is sitting in luxury while taxpayers foot the bill.

The Democrats who fled the state of Texas could be facing arrest upon their return to the state, as they have violated the law concerning leaving during a special session.