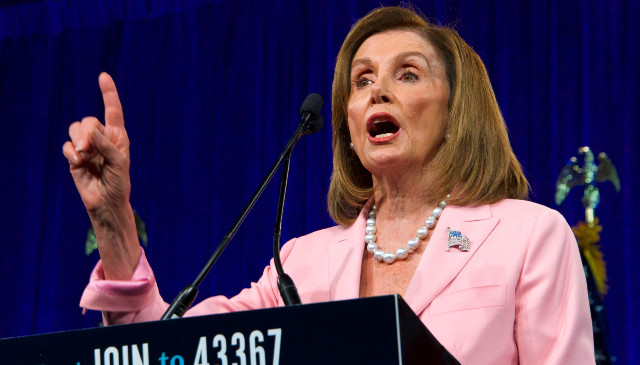 Rep. Nancy Pelosi barely won reelection to the position of House Speaker on Sunday, calling in every possible vote she could to ensure she stayed in control of the House, including bringing in Democrats who had been exposed to the COVID-19 virus, violating pretty much every order and mandate possible to do so.

Before the vote took place, 427 members of the House answered as being “present” during roll call, for a total of 220 Democrats and 207 Republicans. This meant that in order to stay House Speaker, Pelosi would need the vast majority of the 214 votes.

The California Democrat could only afford to lose six Democratic votes.

Guess how many she actually lost? Five.

So desperate was Pelosi to pull off a victory and keep the power and money that comes with the position, a plexiglass box was built in the chamber so that individuals who had been exposed to the coronavirus could still cast a vote for her speakership.

One of these individuals actually tested positive for the coronavirus six days.

One member of the GOP was absolutely livid concerning the move.

“To build a structure like that, in the dark of night, to only protect the votes that Speaker Pelosi needs to get reelected speaker, is shameful,” Rep. Rodney Davis stated. Davis is the top GOP member on the House Administration Committee.

Davis said the “lack of communication with the minority” party in the House made the move “100% political.”

“This is completely against everything we’re told throughout this entire pandemic for house operations,” Davis told reporters Sunday.

In the end, 427 lawmakers voted for a House member, including Rep. Gwen Moore (D-WI), who tested positive for the coronavirus on Dec. 28 but was cleared from quarantine at midnight and traveled to Washington to cast her vote.

This is a prime example of the kind of hypocrisy the left dishes out on a regular basis. Yet the mainstream media will make a million and one excuses for politicians on that side of the aisle, all the while calling for the utter destruction of those who oppose their radical agenda.

If this particular set of actions doesn’t convince you that this whole coronavirus ordeal is being weaponized politically, you’re not paying attention. That’s not to say this virus isn’t serious. However, the exact nature of a lot of information concerning the illness is still being sorted out.