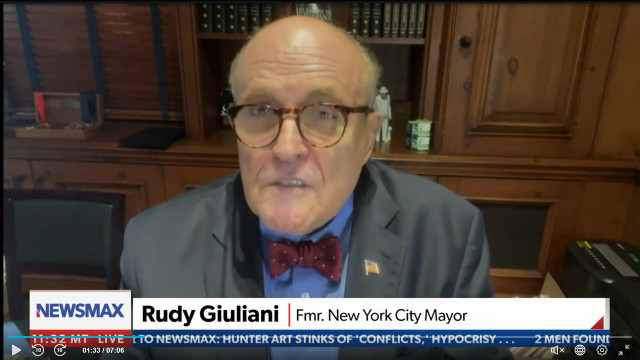 Former Mayor of New York City Rudy Giuliani recently sat down for a chat on the “John Bachman Now” program on Newsmax where he discussed a new report that details how open-air prostitution is now on the rise due to the city’s lax law enforcement of laws concerning the crime, which, according to Giuliani, reveals how the “socialist” rule of Mayor Bill de Blasio is destroying the city.

An explosive cover story in Friday’s New York Post detailed how traffic along a four-block stretch in Brooklyn is filled with women, often wearing little more than lingerie, that are plying their trade on weekends in an “open-air prostitution market” as their pimps remain nearby.

The situation is happening, said Giuliani, because de Blasio is an “extraordinarily bad mayor” who is “soft on crime.”

“He is about the worst mayor the city has ever had,” Giuliani stated. “People say well, prostitution. Why get all upset about prostitution? You can have different moral views about it, but prostitution leads to the degradation of an area all the property values go out … stores move out and the pimps move in. These prostitutes are not working on their own they are working for people who we’ll call pimps. They are extremely dangerous criminals. They all have guns … beating the heck out of women and some of them shoot, have shot, and killed people. So this is not the kind of a benign, you know crime. This is a very, very dangerous, very vicious, very violent crime, and if it’s not controlled, it takes over that neighborhood. And drugs come right in. Mobs and gangs come right in. This is disgraceful that de Blasio let this happen.”

The reports also come as the United States is on an “express train to socialism, and in New York, “we are probably there already,” said Giuliani.

“New York is a one-party government,” he added. “New York has a significant amount of corruption … it’s a city now that once again is like Chicago and Philadelphia and Detroit a high crime city. We had the distinction of being the safest large city in America, something like 17 years in a row. It took me two years to get there. I kept it there. (Michael) Bloomberg kept it there.”

The country is seeing an uptick in crime in a number of different states, especially in bigger cities where the “defund the police” movement has managed to get a foothold and pressure local governments into cutting funding to police departments, which in turn lowers the number of officers available to patrol the streets and answer calls.

If we want to see the number of violent crimes fall, we need to reject this socialistic ideal and apply a little sense to law enforcement by increasing the budget and getting more officers out on the streets.