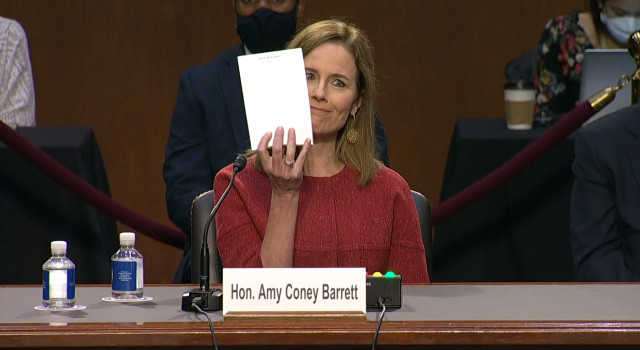 Supreme Court Justice Amy Coney Barrett spoke on Sunday where she stated that she has some concerns over how the public might be increasingly seeing the court as a partisan institution.

According to Barrett, who delivered a lecture that was hosted by the University of Louisville’s McConnell Center, said that justices must be “hyper vigilant to make sure they’re not letting personal biases creep into their decisions, since judges are people, too.”

Barrett was introduced by Senate Minority Leader Mitch McConnell, who founded the center and also played a critical role in pushing through the justice’s confirmation during the final days of Trump’s administration. She went on to speak about her desire for others to view SCOTUS as nonpartisan.

Barrett said the media’s reporting of opinions doesn’t capture the deliberative process in reaching those decisions. And she insisted that “judicial philosophies are not the same as political parties.”

“To say the court’s reasoning is flawed is different from saying the court is acting in a partisan manner,” Barrett, whose confirmation to the spot on the bench left open by the passing of liberal Justice Ruth Bader Ginsburg helped to set in stone  conservative control over the court, went on to say. “I think we need to evaluate what the court is doing on its own terms.”

Barrett’s comments followed a high-profile decision earlier this month in which the court by 5-4 vote declined to step in to stop a Texas law banning most abortions from going into effect, prompting outrage from abortion rights groups and President Joe Biden.

Barrett was asked about that decision by students who submitted questions in advance and also asked about another recent decision by the court in which it refused to block a lower court ruling ordering the Biden administration to reinstate a Trump-era program informally known as Remain in Mexico. Barrett said it would be “inappropriate” to comment on specific cases.

A few pro-abortion supporters showed up outside the Seelbach Hotel, where the private event was being held, to protest.

Barrett, 49, went on to speak about her introduction to the court in the middle of the coronavirus pandemic, going on to state that it was “certainly a different experience.” During all of this time, the court has been hearing cases via telephone, though a recent announcement stated that they would be returning to the courtroom sometime in October.

“I have an important job, but I certainly am no more important than anyone else in the grocery store checkout line,” the justice said, going on to describe how her relationship with her kids— who apparently aren’t “particularly impressed” with her gig in the highest court of the land — helps her to remain grounded in her “regular life” where she stated she  is busy “running carpools, throwing birthday parties, being ordered around.”

When she was asked what kind of advice she would give to young women who are thinking of pursuing a career in public service, she stated she wanted young women to know that they can have a family and still be a success.