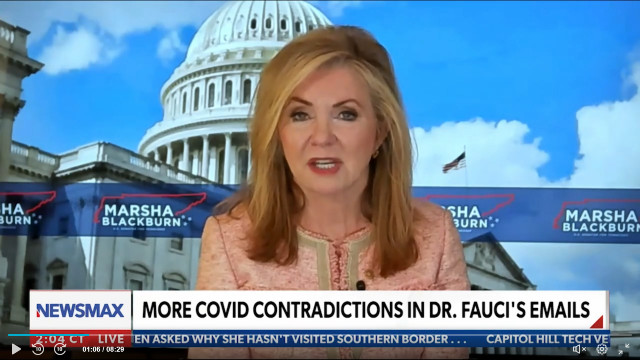 Sen. Marsha Blackburn recently sat down for an interview with Newsmax concerning the topic of Dr. Anthony Fauci, noting that he seemed far more interested in coordinating his own public relations campaign with the help of Facebook CEO Mark Zuckerberg than he is with “protecting the American people,” going on to say that he should probably step back from his current position as the head of the National Institute of Allergy and Infectious Diseases while a full investigation is completed.

Blackburn made the comment during an appearance on the “American Agenda,” program.

“The point is, his focus, was on himself,” Blackburn went on to say. “He was taking care of himself. He was running a PR campaign to craft a narrative that would protect him from criticism. And his job is to be protecting the American people from infectious diseases, and how unfortunate for the American people that he decided that he had dug this hole, typical of some of our bureaucrats, it was too deep to get out of; and so he was in cahoots with Mark Zuckerberg, Facebook, and big tech, in crafting a narrative that would make it look as if this is something that just happened.”

Blackburn then cited some evidence that was culled from the emails of Dr. Fauci which were released last week, noting that he might have known that COVID-19 was engineered and that it’s origins were from the lab in Wuhan.

“We know from the emails [Fauci] was fully aware that they were doing ‘gain of function’ [research]. And that is why in one of the emails, he says, ‘you know, it appears that this has some of the traits of engineering,” she said.

Blackburn then concluded with a fiery allegation that some government entities had previously blocked the investigation into the Wuhan Institute of Virology.

“Now complicating his situation, I believe, and complicating the situation around this entire relationship, with the Wuhan Institute of Virology, is the fact that you had our diplomatic scientists back in 2018 highlighting this; their concerns with this lab to the Department of State. And Secretary Pompeo was trying to do an investigation. And who was it that showed up to block him? Some of the careerists, the institutionalists, the swamp, the deep state, tries to block this investigation to get to the bottom of what is going on inside the four walls of that lab,” Blackburn said.