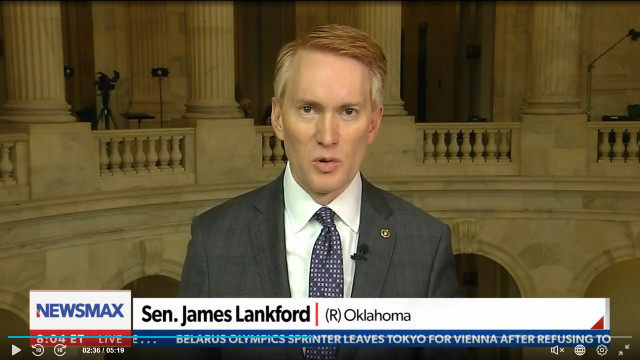 Sen. James Lankford stated on Wednesday during a conversation on Newsmax that the cash that was allocated from the CARES Act for use in this year’s bipartisan infrastructure act doesn’t mean that the country won’t still suffer from a massive debt it will need to repay.

“Our grandchildren will pay for this massive, massive bill,” the Oklahoma Republican went on to say during his conversation on Newsmax’s “Wake Up America,” noting that roughly half of the proposed $1 trillion bill hasn’t even been funded yet and there has been a lot of talk about using the unspent money from the CARES Act to try and help with that.

“The problem is that the CARES Act funds also weren’t paid for,” Lankford explained. “That was an actual emergency that was going on where we had to do some debt spending. This is not an emergency … only $110 billion of this bill actually pays for real infrastructure, bridges, roads, things like that.”

Meanwhile, progressive House Democrats are saying that the party won’t back the bill at all unless a separate $3.5 trillion package advances that includes non-traditional infrastructure like free college and childcare programs, and Lankford said such things are what happens when Democrats take over control of Congress.

But under former President Donald Trump and with Republicans holding the House and the Senate, “we did the largest tax decrease in American history, stimulated the economy with a tremendous number of jobs, and that helped push what happened in our economy in 2019 and early 2020,” said Lankford.

“When Democrats get control, they want to do the largest tax increase in history, and they want to do total redistribution of wealth instead of actually encouraging people to get jobs like we had encouraged before,” Lankford added. “They’re encouraging people to stay home and we’ll just send you money for random projects … the best way to help people rise out of poverty is a job. To be able to do that, it’s also best for their family. It’s best for their kids. It’s best for the nation as a whole. Let’s do that rather than just the redistribution of wealth, which is what the Democrats are trying to be able to push now.”

Also on Wednesday, Lankford discussed reports that migrants from other places besides Mexico and Central America join in the hundreds of thousands of people coming across the U.S. border.

“Every single month, the numbers go up,” Lankford proclaimed. “March was a record number, beaten by April, beaten by May, beaten by June, now beaten by July. Even the Department of Homeland Security has now had to admit in public filings that they had to do in a court case last week that this year looks like it will be the highest number of illegal crossings in the history of keeping records. So this is an absolute catastrophe that’s happened.”

This is a hard pill to swallow for the left, who just simply wants to spend our nation into oblivion. Our founding fathers believed that wracking up a massive debt that is then placed on the backs of our children and grandchildren was totally immoral.

It’s too bad we’ve drifted away from that way of thinking. If we cared about future generations we wouldn’t do this to them, knowing we’re making it harder and harder for them to live good lives and make enough money to support their families.