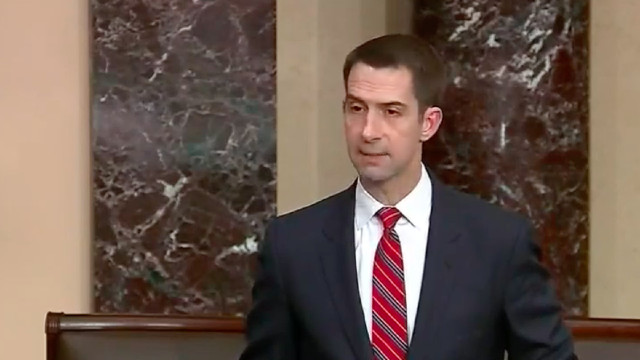 While attempting to point out that the Democrats’ once previously supported the filibuster, Arkansas Republican Sen. Tom Cotton delivered some remarks on the Senate floor using New York Democrat Sen. Chuck Schumer’s words, according to a report from Fox News.

During an appearance on “America’s Newsroom” on Fox Thursday, Cotton stated that the GOP is defending the Constitution, as Schumer and Democrats did in 2003, when their party was in the minority on this topic.

“It was the easiest speech I’ve ever given in my time in politics,” Cotton went on to say. “I didn’t have to write a single word of it. I just repeated what Chuck Schumer said over the years about the importance of Senate rules and traditions and customs to respect the rights of the minority in the Senate.”

According to the Arkansas Republican then said that the Senate “is a place where you have a sober second thought against sometimes transient or fleeting opinions coming from the House.”

“It’s played that role over our history,” he added. “It needs to continue to play that role.”

Democrats, including President Joe Biden and Vice President Kamala Harris, have attacked the filibuster in recent days as they struggle to pass their agenda through the Senate.

During a Nov. 6, 2003, floor speech, Schumer spoke highly of the chamber’s filibuster rule.

“That is part of the hallowed process around here of the Founding Fathers saying the Senate is the cooling saucer,” he said at the time. “We do not work as quickly as the House. We are not as restricted as the House. That is how it was intended to be.”

If the Senate is unable to pass either of the Democrats’ voting legislation bills under the 60-vote threshold, Schumer promised to propose some type of change to the filibuster on or before Jan 17.

Cotton then remarked that Republicans will work this week “”to defend our constitution, defend our customs, [and] protect the voices of all Americans in our government.”