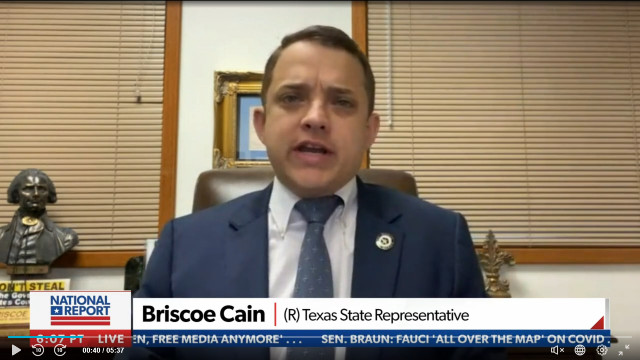 Texas State Rep. Briscoe Cain stated on Wednesday that the Texas Democrats who fled from the city of Austin in order to try and block an election reform bill thought this move would win the hearts of the American people, but in reality are being seen as “nothing but hypocrites.”

“It is hypocrisy, and I think the American people are starting to catch on,” the Republican lawmaker stated during a conversation on Newsmax’s “America’s Agenda.”

“I think it’s failing because people see through this nonsense and realize they’re nothing but hypocrites. They need to come back and come home and get back to work,” he said.

Six of the lawmakers after arriving in Washington tested positive for COVID, as have some Democratic officials they met in the nation’s capital. Cain said he thinks they made the news public for an excuse to remain out of Texas.

“Why did they even want to talk about being COVID-positive if they weren’t trying to use it as some kind of excuse from coming back to work?” Cain went on to say. “I think they overcalculated because our rules our House rules actually do account for this possibility.”

Meanwhile, the contingent has said it won’t disclose if its COVID status has changed after the first six cases, telling NBC News that they are “focusing on our daily testing following and going beyond CDC guidelines, social distancing and wearing masks as much as possible (but) we’re just not going to release daily counts.”

“If this was the other party that was positive, they would be demanding proof and we need them to just go ahead and be frank and honest and open,” the Texas congressman said. “That way they could show us that they’re not using this as an excuse to skirt their duty.”

There are many people questioning whether the Democrats are vaccinated, and Cain said he advocates for transparency on both sides.

“Look, I’m not vaccinated,” he said. “I”m not planning on getting the vaccine.”

“We just get to do nothing for the people of Texas,” Cain said.

These liberals are definitely hypocrites. Because of their actions, they face arrest as soon as they come back to the state of Texas for violating the law by leaving during a session. It’s time the left be held accountable for their actions and their unlawful activism.