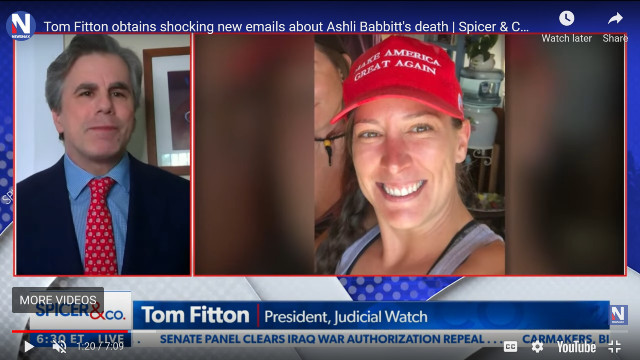 Conservative watchdog group Judicial Watch, which filed a lawsuit looking for details in the questions that are currently surrounding the death of U.S. veteran Ashli Babbitt who was shot and killed by a Capitol Police officer during the riots that took place on January 6, has obtained a treasure trove of emails that is more than 1,000 pages.

Tom Fitton, the president of the organization, has stated that the information in the emails raises even more questions about the delays in reporting the details of Babbitt’s death.

He also told Newsmax’s “Spicer & Co.” Wednesday, while breaking down the emails, that the delays make one wonder if the real issue is politics and an attempt to keep information back until after the impeachment of former President Donald Trump on charges of incitement of an insurrection.

“It is a scandal of epic proportions that we still don’t have basic information about the only person who died via homicide on Jan. 6,” Fitton went on to say during the interview. “In theory, we shouldn’t have to sue for information like this but because there’s this, how is it you would describe it as anything other than a cover-up … was the Trump impeachment one of the reasons they withheld information from the American people about how all these people died?”

The emails received show, in part, that a medical examiner in the case requested Babbitt’s body be cremated just two days after it was received, and that her fingerprint records had been sent to an undeliverable email address that resulted in an error message being returned that was written in Chinese characters.

Babbitt was the only person killed at the Capitol, said Fitton, but “remember there were three others who died of natural causes. What’s going on, that’s what I want to know and that’s why we’re (suing them).”

Fitton then pointed out that the identity of the individual who actually shot Babbit has still not been officially revealed, and he noted that you’d think this kind of information and more about her death would have been released by this point, including the decision to cremate Babbitt’s body so quickly.

“It struck me as odd,” the Judicial Watch president said. “Maybe the family requested it and they accommodated the family’s request on their behalf, I don’t know. But this was an active investigation. They hadn’t determined the cause or manner of death, but applying for the cremation doesn’t necessarily mean the cremation took place.”

Further, the matter of who shot Babbitt should be public information by now, said Fitton, also noting that the reports on the cause of death of Capitol Police officer Brian Sicknick were also delayed, said Fitton, “and we only got that after we sued, and the public disclosure of his manner of death was not a homicide, but natural causes.”

The emails the group obtained also reveal that investigators were communicating back and forth with the office of Washington, D.C., Mayor Muriel Bowser.

“Why was the mayor’s office involved in a criminal potentially murder investigation depending on what the conclusions were?” he asked.

He then added that folks on the left are saying that Babbitt was shot while “doing something seemingly illegal,” but “that’s not the way the rule of law is supposed to work.”

“I want the investigative report about how that how that shooting took place, whether it was justified or not,” Fitton continued. “I want the name of the officer. It’s something that would be required from any other major police department, and frankly, also the FBI wouldn’t be able to withhold this information. But, because it’s (Speaker) Nancy Pelosi’s police force the rule of law doesn’t apply and basic transparency requirements don’t apply.”

This is a very strange case. Let’s hope investigators truly look for the facts behind what happened and that this helps the Babbitt family get closure.