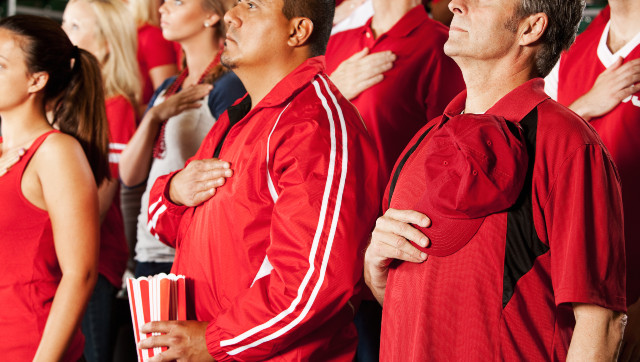 The Washington Post published an opinion piece on Monday with a former sports columnist for the publication which said that “we’ve now weaponized the ‘Star-Spangled Banner,” going on to add, ““Wholly supporting its continued inclusion at domestic sporting events is our new shallow-end referendum on patriotism. … There is a silent majority out there, tired of the hate being spewed in the name of patriotism.”

Yeah, I’m not sure where this guy gets his information, but it seems to me the vast majority of those who are silent on the matter are actually patriotic Americans who aren’t into seeing their sports politicized for extreme left-wing causes.

But that’s just me.

Mike Wise began his essay by referencing the recent controversy after the NBA’s Dallas Mavericks owner Mark Cuban told his staff to stop playing the national anthem before home basketball games. Wise termed supporters of playing the anthem before sports events the “Nationalism Police,” quoting Texas Lieutenant Gov. Dan Patrick stating to Cuban, “Your decision to cancel our National Anthem at @dallasmavs games is a slap in the face to every American & an embarrassment to Texas. Sell the franchise & some Texas Patriots will buy it. We ARE the land of free & the home of the brave.”

Wise noted a meeting between NBA Commissioner Adam Silver and Cuban, writing that they had a “genial chat.”

“That leash the league gave teams to do what they felt was appropriate after the summer of 2020? Gone,” wrote Wise. “Play-the-anthem league policy was reinstated, including at Mavericks games, last week.”

Wise mused, “The moment for change had passed.” Then he launched into his attack on playing the anthem before sporting events.

“Cuban had it right the first time. Like the flag before and after Jan. 6, we’ve now weaponized the ‘Star-Spangled Banner.’ Wholly supporting its continued inclusion at domestic sporting events is our new shallow-end referendum on patriotism. The anthem has already split the country,” Wise said.

“Organized sports have cheapened the national anthem for decades. The lyrics and the music have been co-opted by professional leagues determined to forge an unneeded alliance between sports and nationalism,” he continued.

Then Wise went on to mock the NFL.

“Roger Goodell’s NFL uses America as its brand, wrapping itself in 100-yard flags, military fighter-jet flyovers and, by God, quarterbacks who stand for the national anthem. To be pro-American is to be pro-football — and revel in the absurdity of it all, the way Joe Buck and Troy Aikman did on Fox last year when their mics were still on:

Aikman: ‘That’s a lot of jet fuel just to do a little flyover.’

Wise then went on to quote super left-winger Stan Van Gundy, the head coach of the New Orleans Pelicans who said that whites “are the ones who are racist.” Last summer he also had this to say about our great country: “We committed genocide against Native Americans. We have enslaved, lynched, segregated and incarcerated blacks over 400 years. Women couldn’t vote for 140 years. Using abuses elsewhere to try to distract from our own poor record on human rights is dishonest.”

When Van Gundy weighed in on Cuban’s decision to stop playing the National Anthem he said, “This should happen everywhere. If you think the anthem needs to be played before sporting events, then play it before every movie, concert, church service and the start of every work day at every business. What good reason is there to play the anthem before a game?”

“None, really, other than at the World Cup, the Olympics and maybe a state high school or college national final. There is a silent majority out there, tired of the hate being spewed in the name of patriotism,” Wise then said in his piece.

This is where we are now as a country. It’s suddenly become totally unpopular to love your nation and want to see her celebrated before major sporting events. It’s insane just how far the left is going to try and make people feel ashamed of America.

You see, they want you to hate this nation. It will make it easier for you to swallow the big pill when they finally get what they want and are able to transform this country into a socialist nightmare.