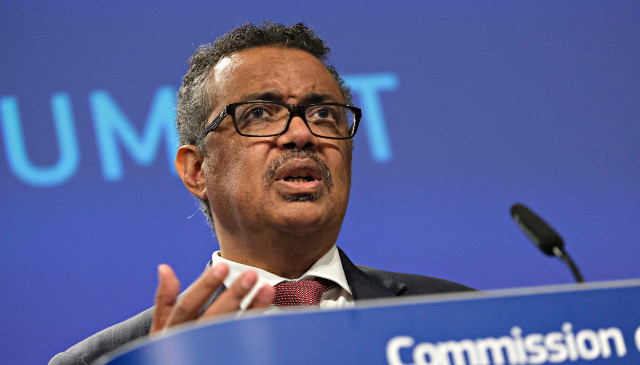 Ever since the coronavirus pandemic first started, World Health Organization Director General Tedros Adhanom Ghebreyesus has been taking a whole lot of heat.

However, another member of the WHO advisory board, Jamie Metzl, recently told the folks over at Newsmax on Wednesday that he believes Ghebreyesus is a “hero of this latest stage of the process,” after he rejected an independent commission’s report on the origins of the illness last March and made the call for more information.

“On the day in the ceremony when that report was released, Tedros did something incredible,” Metzl said during a conversation on Wednesday’s edition of  “Wake Up America,” going on to shoot down host Rob Finnerty’s skepticism of the director general. “He basically rejected the entire report. He said this is insufficient. We need a full investigation, and he called on states and others to authorize that investigation. I know, I think, it’s too easy to beat up on the WHO.”

The organization is not perfect, Metzl added, and further investigation must be demanded on COVID, but he called it “misinformation” to blame Tedros for the report. Metzl is a Democrat who worked under then-Sen. Joe Biden as deputy staff director on the Senate Foreign Relations Committee.

Back in March, Tedros said the mission, which was carried out by an independent team and Chinese counterparts, did not adequately analyze the possibility of a lab leak from the Wuhan Institute of Virology before concluding the virus spread from bats to humans through another animal.

At that time, Tedros had stated that he was ready to go ahead and deploy more investigations.

Finnerty noted, care should be taken when calling Tedros a hero, as he had still allowed the March 2020 report to be released and had made erroneous statements on the pandemic, but Metzl countered there many cases of misinformation, including from then-President Donald Trump.

“There was a lot of misinformation,” Metzl went on to say. “We need to look at it all and hold people accountable for it, and certainly tedious has expressed his regret at some of those early statements. But I will reiterate Tedros was a hero of this later stage of the process because this report that was mandated, he didn’t call on this report. He then rejected it, and called for a full investigation. And that’s been a rallying cry of people trying to get to the bottom of this all around the world.”

Metzl then insisted that he himself was the actual “leading international voice” who referred to the March 2020 report and the process that was used to gather all of the information it included a “total shame.”

“It was shockingly incomplete and, frankly insulting,” he continued. “But we also need to be clear who the entity was who carried out that study mission. People call it a WHO investigation, but it wasn’t an investigation, and it wasn’t carried out by the WHO. It was a joint commitment by an independent expert committee that the WHO helped organized but didn’t control and their Chinese government counterparts, and that process was a total sham. ”

“When a plane crashes, we do everything we can to figure out what happened and because we need to have that information to fix our biggest problems,” he added. “If we want to prioritize our efforts to prevent the next pandemic, it’s critically important that we understand how this one started.”

Metzl said there are currently two “very credible hypotheses” for how the pandemic started and where the virus came from, noting that both of these possibilities needs to be thoroughly investigated.

“If we knew just hypothetically that this absolutely started with a lab incident that would put a lot of pressure on us to look at the regulation of these almost 60 highest level of virology institutes spread around the world, which are doing a lot of experimentation that is dangerous,” Metzl explained. “It may be some of a lot of it may be necessary, but it’s dangerous, and it’s regulated differently in different places.”

Metzl said that the main reason we don’t have a definitive origin for the COVID-19 virus is because the Chinese government has been engaged in a “massive coverup” since it all first started.

However, Metzl did note that allegations of China making “some kind of bioweapon” and then releasing it would “be such an inefficient way to do things,” but then stated using the term “accidental” just perpetuates more misinformation.

“We don’t know if it was an accident [or] if it was deliberate,” Metzl stated. “That’s why we need this investigation.”